How do hybrid car designs aid in fuel efficiency? 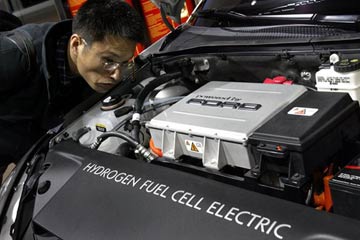 You probably know that a hybrid car uses both a gasoline engine and an electric motor. But greater complexity often translates into less efficiency. So how does this combination of power sources actually cut fuel use?

The basic answer is that electric motors are most efficient for low-speed driving -- they get the car going with a minimum expenditure of energy. Since gasoline engines operate better at high speed, they kick in for highway driving. This teamwork results in hybrids that get close to 50 miles per gallon, a 25-percent improvement over gasoline-only vehicles.

Hybrids often use an Atkinson cycle engine, which is not quite as powerful as a standard motor but uses gasoline more efficiently [source: MixedPower.com].

Engineers have used a number of other design elements to increase the fuel efficiency of hybrids:

Not all of these fuel efficiency designs are exclusive to hybrids. But because hybrid buyers are interested in miles per gallon, engineers try to add as many of them as possible to the cars' engineering.

Read on to find out more about hybrid car design.