Who designed and built the first hybrid car? 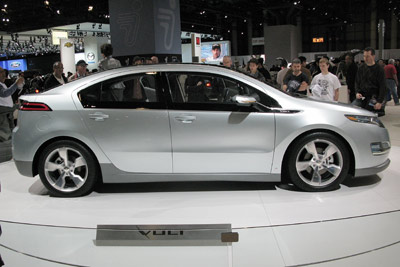 The technology used in cutting-edge hybrids like the Chevrolet Volt has been around for more than a century. Surprised?
Spencer Platt/Getty Images

Car companies market hybrid vehicles as the newest and most innovative ways to transport people from point A to point B, but in actuality, they've been around for more than a hundred years. In fact, the basic functions and systems used in today's hybrids are very similar to those used in America during the turn of the century.

Hybrid vehicles use two different power sources to create motion for the vehicle. The most common hybrid system is the gas-electric hybrid, which uses both an internal combustion engine and an electric motor powered by batteries to make the car run. However, in the late 1800s and up until the early 1900s, electric vehicles were the rising stars of the automotive industry [source: Hybrid Cars]. In 1897, the London Electric Cab Company used cabs equipped with 40-cell batteries and 3-horsepower electric motors to run their cars for 50 miles (80 kilometers) without having to stop to recharge [Source: Hybrid Cars]. Over the two years that followed, the Pope Manufacturing Company in Hartford, Conn., produced almost 500 electric cars to be sold.

Around the same time that these companies were building and using electric cars, a German engineer was building his first car, the Lohner Electric Chaise. It was the world's first front-wheel-drive vehicle. The man who built it has a name beloved among car buffs -- Ferdinand Porsche -- and his second car would be the first-ever hybrid vehicle [source: Hybrid Cars]. The Lohner Carriage Company hired Porsche when they decided to make the transition into the horseless carriage market [source: Wand]. Porsche's car used a type of series hybrid system used in some hybrid vehicles today, like the Chevy Volt. This type of hybrid used the batteries (rather than the internal combustion engine) as the primary source of power for the wheels.

Head to the next page to learn more about the Lohner-Porsche hybrid and how other hybrids were coming into existence around the same time.

Porsche's hybrid used an internal combustion engine that ran at a constant speed to turn a generator and charge the vehicle's batteries [source: Wand]. These batteries then sent electricity to motors located in the hub of the wheels. When fully charged, Porsche's hybrid allowed the vehicle to travel almost 40 miles (64.3 kilometers) [source: Hybrid Cars]. The vehicle was ahead of its time, not only as the first gas-electric hybrid, but also because it was one of the earliest examples of in-wheel motor power.

Similar to current in-wheel motor technology, Porsche's hub motors eliminated the need for a gearbox, drive shafts or chains and a clutch, which eliminated a substantial amount of mechanical friction and allowed the vehicle to use 83 percent of the energy it produced [source: Wand]. A few years later, Porsche added hub motors to all four wheels, which increased the amount of power the car had and allowed it to reach a top speed of 70 mph (112.6 kilometers per hour) [source: Wand].

Although Porsche's hybrid was the first to be designed and built, a German inventor named Henri Pieper applied for a U.S. patent on his hybrid in 1905 and received it in 1909 [Source: Hybrid Cars]. Pieper's design was similar to that of many of today's hybrids, using both the gasoline engine and the electric motor to power the vehicle when needed.

Now that we know who built the first hybrid vehicle and have learned about another early hybrid design, let's go onto the next page and find out why hybrid cars didn't become the primary system of choice for automobile consumers and how later developments brought the hybrid to center stage. 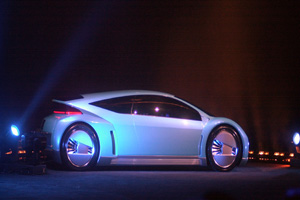 Although electric cars were popular at the turn of the 20th century, they didn't come to the forefront of the automobile market until that century's end.
Bryan Mitchell/Getty Images

A poll was taken at the first National Automobile Show in New York City in 1900 to see what type of vehicle the attendees preferred. The top answer was electric vehicles, followed closely by steam-powered cars. Internal combustion engines came in last [Source: Hybrid Cars]. Thousands of hybrid vehicles were being produced around this time, but that type of car production began to slow down when Henry Ford introduced the automobile assembly line [Source: Hybrid Cars].

It wasn't until the late 1960s and early 1970s that automobile companies and scientists began experimenting with hybrid vehicles again [Source: Hybrid Cars]. When an oil embargo hit the United States in the early 1970s, the Department of Energy began testing several types of alternative car technologies. One type was a parallel hybrid car created by Volkswagen called the VW Taxi, which could switch from an internal combustion engine powered by gasoline to electric power [Source: Hybrid Cars].

Over the next several decades, car companies experimented with alternative technologies. In 1999, Honda sold the first mass-market hybrid in the United States, called the Insight [Source: Hybrid Cars]. One year later, Toyota introduced the Prius, which won the Car of the Year award from Motor Trend Magazine in 2004. Although these two vehicles use the parallel hybrid system, Porsche's series parallel system is still used in hybrids today.

It took almost one hundred years for automakers to mass-produce hybrid vehicles in America; meanwhile, battery technology, engine efficiency and electrical systems have improved, allowing even greater opportunity for the future hybrid vehicles.

For more information about hybrid cars and how they work, go on to the next page.