by Alison Kim Perry
NEXT PAGE 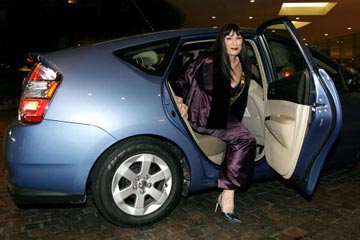 You've seen them everywhere. On the highway, in your neighbor's driveway and even advertised on TV commercials during your favorite sitcom. They're the darlings of the go-green movement: hybrid cars. One of the many solutions to finding ways to preserve Mother Earth, hybrid cars are the epitome of social consciousness. With their complex dual engines and their knack for getting rave reviews, they're like the popular kids in school that everyone talks about. They're also pretty darn cute.

Hybrids are an alternative to driving gasoline-powered vehicles. They don't need as much fuel to run because they're able to rely partly on an electric motor for power. Proponents say hybrid cars have the potential to help reduce our country's dependency on oil, while critics state that the higher sticker prices for hybrids don't justify forking over the extra cash to own them. Still many Americans are convinced of their long-term benefits. A recent poll revealed that 83 percent of Americans favor paying an additional $3,000 for a vehicle in 2025 if they could save $3,000 in gasoline costs within four years of purchasing the vehicle [source: Hybridcars.com] .What many people don't know is that hybrids come in many forms. For these vehicles, one size doesn't fit all.

Whether you're in the market to own one or are just curious about what the hype is all about, we'll take a moment to explore the different types of hybrid cars.