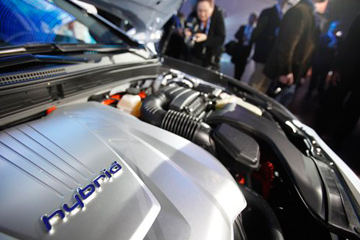 We all know the old saw: Hybrid cars are underpowered. They save on gas and emissions, but drive one and you'll be relegated to the right lane.

Well, like most old saws, that one is untrue. Judging how powerful a hybrid is means more than just talking in terms of "underpowered" and "throw-you-back-in-your-seat." Like most cars, hybrids have their power output measured in horsepower. Horsepower is a unit that measures how much power an engine has to do work. In everyday terms, horsepower is the force your car's engine creates to move the car.

But, compared to gas-only cars, hybrids have much smaller engines. Hybrids have smaller engines for a reason: The smaller the engine, the lighter it is. With less weight, the engine doesn't have to work quite as hard to move the car over a given distance. Less work means the engine uses less fuel -- and isn't that the point of a hybrid?

On the other hand, the smaller the engine, the less horsepower it can create. That's why so many people think hybrids don't have enough power for everyday driving. When you compare the size of the gasoline engines in most hybrids to the engines in standard cars, the standard cars' engines tend to be bigger, and make more horsepower.

Look more closely at the issue, however, and you'll see that hybrids have a trick up their sleeve. Keep reading to learn exactly what that trick may be. 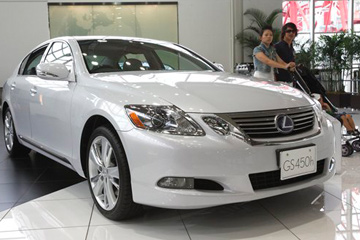 Visitors look at the Toyota Lexus GS 450h at a Toyota showroom in Tokyo, on July 1, 2010.
AP Photo/Shizuo Kambayashi

If you know how a hybrid car works, then you know it uses a small gasoline engine, just like a standard car. But, what makes it a hybrid is the presence of a small electric motor. That electric motor is key, because using energy from the hybrid's battery pack, it can power the hybrid at slow speeds. That allows the gasoline engine to shut off when it's not needed, which saves on fuel an emissions.

Take the Lexus GS 350 sedan, for example. The GS 350 has a 3.5-liter V6 that makes 303 horsepower. That's not too shabby. But, the hybrid GS sedan -- the GS 450h -- has the same V6 engine. The engine alone makes 292 horsepower, but, when you add in the contribution of the GS 450h's electric motor, the total horsepower output rises to 339 horsepower. Even against the gas-only Lexus GS 460, which has a 4.6-liter engine and a maximum horsepower rating of 342 horsepower, the 450h's output is pretty close. Despite having a much larger engine, when compared to the GS hybrid with its electric motor, the GS 460 only makes 3 more horsepower than the GS 450h.

So that's where the debate on horsepower between hybrid and standard cars comes from. When looking at a car's power output, should you look at the horsepower generated by the gasoline engine, or should you take the contribution of the electric motor into account?

Most car reviewers put it in real-world terms. When you're driving a hybrid, you likely won't be able to tell when the electric motor kicks in to help the gasoline engine out. The car reviewers at Consumer Guide Auto say that in the GS hybrid, "The gas/electric powertrain lacks the immediate kick of a V8, but the 450h does surge ahead with dispatch. A test example did 0-60 mph in 6.1 seconds. Overall, the hybrid system calls little attention to itself."

From a technical standpoint, it makes sense to compare hybrid horsepower to standard car horsepower only in terms of the contribution of the gasoline engine. But, out on the road, whether the car's power is coming from an electric motor, gasoline engine or a combination of the two isn't likely to make a difference.

For more information about hybrid cars, horsepower and other related topics, follow the links on the next page.