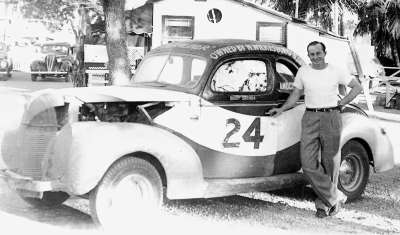 Top contending driver Buddy Shuman stands beside the 1939 Ford he ran at North Wilkesboro Speedway. The track, which opened on May 18, 1947, actually owned Shuman's car.  often fielded top running cars to ensure quality cars  at their races. Shuman scored his first win of  one week later at Birmingham, Ala.,  Glenn Dunnaway in a close finish. See more pictures of NASCAR.

In 1947, NASCAR was first formed into a private corporation. Visionary Bill France saw the potential of a unified, organized racing series and he took a bold, decisive step by announcing the formation of the National Champ­ionship Stock Car Circuit (NCSCC). This new touring series for stock car jockeys was complete with a standard set of rules, points standings and prize money. By the end of the 1947 season, attend­ance at most of the NCSCC races exceeded capacity and France knew it was time for stock car racing to expand beyond its Southern roots. He held a big NCSCC convention in Daytona Beach, appointing technical and competition committees within all factions -- drivers, mechanics, and ­owners. Louis Jerome Vogt, ace-mechanic of the era, coined the name for the new organization: National Association for Stock Car Auto Racing. You can learn about these events and more in the following article, from season highlights to the year's champion, all packed with plenty of photos.

Bill France announces he will direct a series of stock car races under the National Championship Stock Car Circuit banner in 1947. France's slogan for the new touring series is "NCSCC: Where The Fastest That Run, Run The Fastest."

Red Byron captures the inaugural NCSCC event, billed as the "Battle of Champions," on the Beach-Road course at Daytona.

Fonty Flock wins the inaugural event at North Wilkesboro (N.C.) Speedway. The race is a smashing success, with over 10,000 spectators in attendance.

Bob Flock drives his Ford to victory in the NCSCC event at Greensboro, N.C. Ed Samples, the recognized 1946 stock car racing champion, rolls three times but ­continues in the race.

Jimmie Lewallen slips past Fonty Flock on the final lap to win the 80-lap NCSCC race at High Point, N.C.

Bob Flock leads most of the way and wins the 200-mile marathon race at Langhorne Speed­way's circular one-mile track in Pennsylvania. Forty-five cars start the race, but only 19 finish.

Fonty Flock, who hadn't raced since being severely injured in the ­summer of 1941, returned to stock car racing in 1947. Here, Flock hugs the inside rail and leads #15 Bill Snowden and #14, big ­brother, Bob Flock.

Bob Flock starts last, charges to the lead in the opening lap, and sprints to an overwhelming victory in the 100-mile race at Daytona Beach.

The new track in Martinsville, Va., opens to a large crowd. Red Byron finishes first in a 50-lap event that is marred by deplorable dust conditions.

A huge crowd of 20,000 turns out for the 160-lap race at North Wilkesboro. Marshall Teague wins as more than 1000 carloads of racing fans are turned away due to lack of parking space.

Bob Flock falls out of ­contention for the championship when he fractures his back in a spill at Spartanburg, S.C., and is forced to miss the rest of the season.

Marshall Teague drives his Hill Motor Co. #4 Ford around a track without a protective helmet. Teague was injured in a spill at North Wilkesboro and missed several races. He still accumulated enough points to rank 10th in the championship chase at the end of the 1947 NCSCC season.

Bill France meets with 35 others who share a concern for the future of stock car racing at the Streamline Hotel in Daytona Beach. A set of rules is established and Red Vogt coins the name National Asso­ciation for Stock Car Auto Racing, which becomes NASCAR. Fonty Flock, winner of the NCSCC title, will be listed as "1947 NASCAR Champion" in all early season press releases.