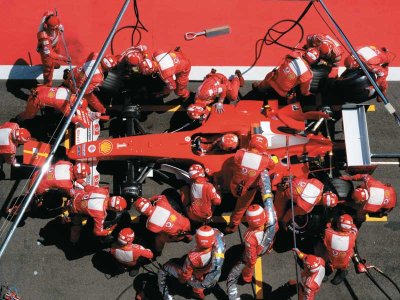 Ferrari F1 puts the red cars of Maranello at the center of the world's most demanding form of motorsport.

This article tells the story of the sleek, open-wheel single-seat Ferraris that compete in the most technically demanding form of auto racing. With circuits on every continent, no other form of auto racing matches Formula 1 for financial stakes, worldwide audience, historical sweep, or sheer glamour.

Discover how Ferrari's involvement began before this was known as F1, with company founder Enzo Ferrari in association with Italian automaker Alfa Romeo as a race driver and team manager.

Known before World War II as Grand Prix racing, it adopted the name Formula 1 in 1947. Ferrari's first F1 car, the 125 F1, appeared in 1948. Since then, Ferrari F1 cars have won more races and more world championships than any other maker's.

Learn about the immortal drivers who captured world championships in Ferrari 1 cars, from Alberto Ascari and Juan Manuel Fangio in the 1950s, through Phill Hill and John Surtees in the 1960s, Niki Lauda and Jody Scheckter in the 1970s, right up to Michael Schumacher's unparalleled run of five consecutive titles starting in 2000.

The thrilling story of the machines and men who make up the Ferrari F1 saga begins on the next page.