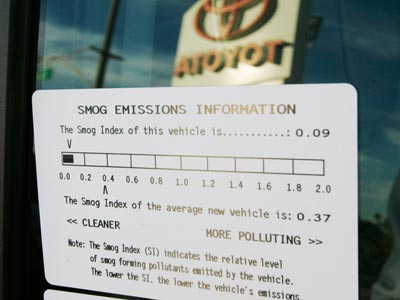 Hybrid cars, when using the gas engine, create pollution like any other conventional vehicle. The use of an electric motor, however, cuts down on that pollution.
AP Photo/Reed Saxon

The simple answer to the question of whether or not hybrid cars cause pollution is: Yes, of course they do. The majority of hybrid cars in production and on the road are gas-electric hybrids, and they burn the same kind of fuel used in conventional, gas-powered cars. Hybrid car emissions pollution is a real thing, but what makes these fuel-efficient vehicles attractive to people interested in eco-friendly driving is how much less pollution they cause in comparison to conventional cars.

What sets hybrid cars apart from other cars on the road is how (and how often) the gas engine actually powers the vehicle. Although there are several different ways to divide power between the gas engine and the electric motor, the gas engine in a hybrid car will usually kick in at higher speeds. For example, gas engines generally provide more horsepower than electric motors, so they're necessary for trips along the highway where speeds reach 45 miles per hour (72.4 kilometers per hour) or faster. Of course, that speed varies from vehicle to vehicle and is even dependent on how aggressive the driver accelerates.

To increase fuel efficiency and promote green driving, however, the electric motor in a hybrid car operates at lower vehicle speeds. This is one of the reasons why many advocates of hybrid cars feel that the vehicles are ideal for city driving, where people don't have to drive long distances and speed limits are typically much lower. The electric motor can also provide additional power during acceleration or when a hybrid is climbing a steep incline. Most hybrid cars also don't have to plug into a power source, since the gasoline engine works to charge the battery.