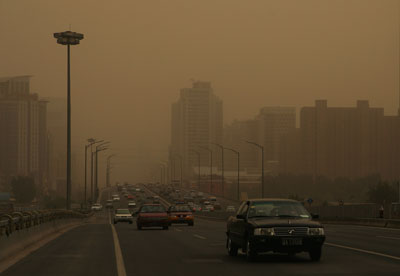 Image Gallery: Environmental Issues Smog over Beijing, China, in May 2008. The nation is the largest emitter of carbon dioxide; the United States is a close second. See more pictures of environmental issues.
Guang Niu/Getty Images

Around the world, people are growing increasingly concerned about carbon dioxide (CO2) emissions. Certainly, climate change skeptics pose reasonable hypotheses that suggest changes in climate are merely a natural, global cycle -- and we humans are just going to have to ride out. But the idea that humans are contributing to climate change is becoming more accepted. In response, scientists are thinking of ways to reduce humans' greenhouse gas (GHG) emissions.

One way is to create fuels that don't produce carbon dioxide as a byproduct, like fossil fuels do. Biofuels like cellulosic ethanol made from corn or switchgrass still emit CO2 when burned for energy, but in far smaller amounts -- as much as 85 percent less [source: Wang]. Burning hydrogen to power a car produces no carbon dioxide; the only byproduct is water. And electricity produced from renewable resources like wind or solar power doesn't produce any emissions at all.

The problem with these technologies is that they're still being developed. Researchers are facing obstacles like cost and net energy ratio -- input of energy versus energy output -- that make oil more attractive than alternative fuel sources. This is significant, because our world is powered by oil. From the airplanes that make travel possible, to the trucks that transport food and the power plants that produce our electricity, oil dominates the global economy.

It's a pretty good question: If we're dependent on oil but concerned about carbon dioxide emissions, why don't we just capture the CO2 we emit?

Actually, researchers are looking into this right now. Professor Chris Jones at the Georgia Institute of Technology (Georgia Tech) and his team have come up with a material called hyperbranched aminosilica (HAS) that captures and stores carbon dioxide emissions.

So will we soon find tailpipes on cars made of HAS, and what exactly is this material anyway? Find out on the next page. 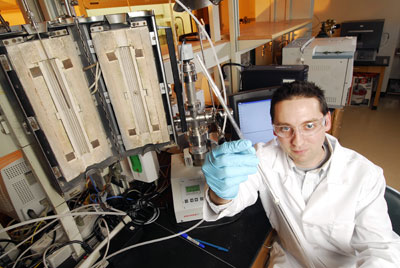