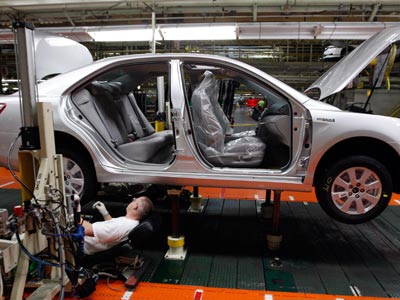 A significant amount of energy goes into producing hybrid cars, but it's no more than what it takes to make conventional cars.
AP Photo/James Crisp

One point many people don't always consider when thinking about consumer products is how much energy is expended to actually make them and move them around. For instance, when supporters of green driving recommend buying food locally they're stressing the fact that many foods are shipped long distances to get to various neighborhood supermarkets. It requires burning lots of gasoline or diesel fuel to transport that food such a long distance, which only increases the suppliers' carbon footprint. If more people bought food locally, however, that food would have shorter distances to travel, and those that deliver the goods would burn less fuel in the process.

Of course, it takes a lot of energy and resources to make a car -- and that doesn't exclude fuel-efficient vehicles like hybrid cars either. If you've ever seen pictures or video footage of an auto manufacturing plant, you'll see not only plenty of trained workers surveying the progress but also a complex labyrinth of machines. All of the parts that make up the car have to be built and forged, and it takes a significant amount of electricity and other sources of power to do this.

So, is hybrid car production pollution really a big deal? This topic actually caught the attention of the media and the public in 2007, when CNW Marketing Research, Inc. issued a report called "Dust to Dust: The Energy Cost of New Vehicles from Concept to Disposal." The paper claimed to calculate a dollar value for all of the energy necessary to create, build operate and dispose of a vehicle, and it made the surprising claim that the Toyota Prius costs more over the course of its lifetime than a Hummer H3. This, of course, confused and dismayed Prius drivers, since Toyota emphasized fuel efficiency and eco-friendly driving while marketing the hybrid to them.

After blogs and online newspapers began citing the paper and spreading its information around, several publications quickly criticized the findings from CNW for poor analysis and lack of peer review. While "Dust to Dust" claimed that most of the energy used by a vehicle came from its design and production, several other studies have found that 80 to 90 percent of a vehicle's energy is used during operation -- in other words, when you're driving it [source: Gleick].

At the very most, it takes 13 percent of the vehicle's lifetime energy to actually produce the car, whether it's a hybrid or a Hummer, and most carmakers are finding ways to reduce their environmental impact during the design and production phase by replacing hazardous substances like lead and hexavalent chromium with more sustainable materials.