What is my vehicle's greenhouse gas score? 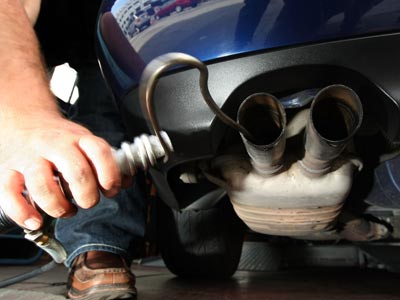 Where can you find out your vehicle's greenhouse gas score?
Justin Sullivan/Getty Images

When you fill up your car's fuel tank at the gas station, it's easy to think about something other than your car while the price rises. You might be going over that grocery list in your head, or plans you've made for the coming weekend. But how often do you actually think about the gas that's going into your car and what happens to it, aside from the mechanical movement it takes to pump the fuel?

It's easy to forget about what happens to gas when we drive our cars around, especially because most of the time the byproduct of the combustion that's happening within our engines is pretty much invisible. But when we put our foot to the pedal and accelerate any vehicle, we're releasing emissions into the air that pollute and float up to accumulate in the atmosphere. When large numbers of vehicles burn fossil fuels, including gasoline and diesel fuel, they give off carbon particles which, when concentrated, can actually change the planet's climate. The major emissions coming out of your tailpipe are mainly carbon dioxide (CO2), and a collection of other gases commonly known as greenhouse gases -- something scientists suggest we should cut back on.

As concern over global warming and oil dependence increases, many are looking for ways to lessen our impact on the environment and encourage green driving. Several organizations are taking steps to create change: The Obama administration, for instance, announced tougher fuel efficiency standards in May 2009, raising the national mile per gallon average to 35.5 (15 kilometers per liter) [source: Motavalli]. This is creating a strong awareness from drivers everywhere who are seeking out the best fuel consumption.

One tool that new car shoppers may find useful while looking for a new vehicle is called the Green Vehicle Guide, which comes from the U.S. Environmental Protection Agency (EPA). The guide lists environmental performance information for vehicles and allows people concerned about eco-friendly driving find greener, cleaner cars. 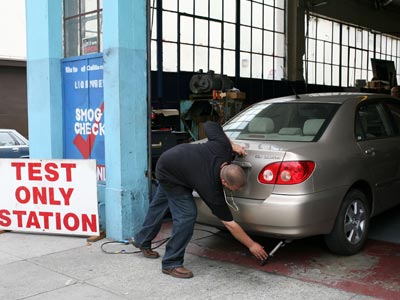 The greenhouse gas score given by the EPA measures your vehicle's fuel economy.
Justin Sullivan/Getty Images

There are actually two scores that the EPA gives to vehicles when putting together its Green Vehicle Guide. First there's the air pollution score, which measures how substantially a car's tailpipe emissions affects local and regional air quality. Any issues such as smog, haze and other problems caused by carbon emissions are all a part of air pollution. Vehicles are scored on a scale of 1 to 10, with 1 being dirtiest and 10 being the cleanest, so it's accessible and easy to understand which cars are best fit for eco-friendly driving.

Whereas the air pollution score takes into account the way your exhaust will affect nearby areas, the greenhouse gas score has a slightly broader scope in mind. It also takes into account a vehicle's fuel efficiency, or essentially an estimate of how many miles per gallon a car can get during a trip in the city or down the highway. These numbers are readily available; you can find them listed on the window stickers of new cars, inside the Fuel Economy Guide published each year by the EPA and the Department of Energy, or at auto dealerships, public libraries and Web sites like fueleconomy.gov.

The reason for establishing a greenhouse gas score is to take note of vehicles that can travel the same distance as another car yet burn less fuel in the process. When fuel consumption is lower, the amount of greenhouse gases emitted into the atmosphere -- mainly carbon dioxide, nitrous oxide and methane -- is also lower. Just like the air pollution score, the greenhouse gas score is based on a scale of 1 to 10, and the higher your car scores, the less your car contributes to global warming and climate change.

Carbon emissions from various fuels will vary because every fuel type burns differently. The amount of carbon released from gasoline in one mile, for instance, is not the same as the amount released from diesel or clean natural gas. The scores take into account not just petroleum-based fuels like gasoline and diesel but renewable fuels like E85. While the EPA considers the whole lifecycle of fuels, including the extraction, refining and distribution of products, it doesn't count vehicle manufacturing into its score. That's one more area you'll need to investigate on your own if you want a truly green car.

For lots more information on cars, vehicle emissions standards and green driving, follow the links on the next page.