Can owning a hybrid car get me an HOV decal? 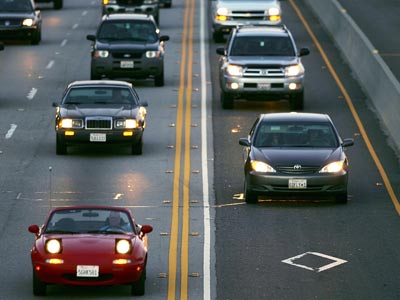 There are many kinds of incentives for hybrid car owners, and getting an HOV decal can be one of them.
David McNew/Getty Images

In most cities and states throughout the United States, the High Occupancy Vehicle (HOV) lane is the coveted strip of the highway. Also known as the carpool lane or the diamond lane, the HOV lane isn't for every car on the road. Although rules vary from state to state, it's generally set aside for any cars, trucks, buses or vans with two or more people inside. On top of that, motorcycles and emergency vehicles get to use them, too.

The point of the HOV lane is to free up traffic congestion and increase efficiency by giving vehicles carrying more people special access to the inside lanes, which are typically the far left ones. Commuters are therefore given incentive to pile more people into their cars or take the bus to work, and this is supposed to cut down on the number of cars out on the road, too. Carpoolers can therefore get to work faster since the outside lanes with single drivers will be more congested, and buses running on tight time schedules can make it from stop to stop easier. You can easily identify the HOV lane because it's typically separated from the regular lanes by a solid white line and it includes a repeating series of large, white diamonds that run through the center of the lane, hence the nickname "diamond lane."

Fewer cars on the road equal fewer carbon emissions, which can significantly lessen the impact vehicles have on global warming. This has made carpooling and the HOV lane an important part of the push for eco-friendly driving. But lately some states have considered another class of vehicles for the diamond lane, and, interestingly enough, carpooling doesn't factor into the equation.

Depending on where you live, owners of fuel-efficient vehicles like hybrid cars might get special privileges on the highway. Since the focus of a hybrid car is on fuel efficiency and green driving, some hybrid cars could get the same benefits as a bus or a carpool van. 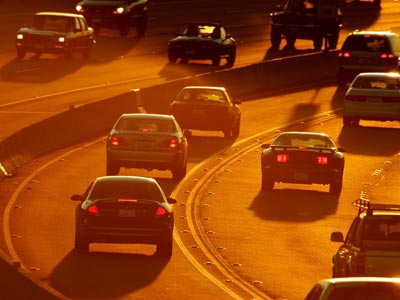 Hybrid car owners have snatched up HOV decals, but the large number of hybrid cars in the diamond lane actually may have made traffic in some areas worse.
David McNew/Getty Images

Because hybrid cars generally produce fewer emissions than conventional gasoline-powered cars, these fuel-efficient vehicles offer the same symbolic gesture for green driving as carpooling does. This has led some states, including California, Virginia, Arizona and Colorado, to offer special permits or decals for hybrid car owners which give them access to the HOV lane. Other states, like Connecticut and Georgia, have considered similar measures but have yet to pass legislation.

In this situation, what sets hybrid cars aside from carpools or buses is that hybrid car owners with an HOV decal don't have to have two or more people in the car to use the lane. If there's just one person driving a hybrid car, and that vehicle has a legitimate decal, the person is using the HOV lane legally and won't get a ticket or incur any other restricted lane penalties.

This is good news for hybrid car owners living in the states offering the programs, and not just because it can let drivers pass traffic on the left. It has also increased the value of hybrid cars -- in California, for instance, drivers buying a used hybrid car were willing to pay an extra $4,000 for a hybrid car with an HOV decal. This, of course, may just be supply and demand working itself out, since the California Department of Motor Vehicles (DMV) issued no more than 85,000 decals to Honda Insight, Honda Civic hybrid and Toyota Prius models, all of which get 45 miles per gallon (19.1 kilometers per liter) or more. The decals are non-transferable, too. Once a sticker is placed on a car, that's where it stays [source: Hybrid Car Review].

Ironically enough, one problem with hybrid cars in HOV lanes has been more traffic congestion. During the early stages of these programs, drivers in some states complained of congested carpool lanes, placing the blame on the increase in the number of hybrid cars awarded the special decals. In 2007, for instance, traffic in carpool lanes in Los Angeles and Orange County, Calif., became seriously affected. Others point out a lack of problems in different areas of the state, such as San Diego and Riverside counties, and claim that hybrids aren't the cause for congestion; instead, citing that rising populations in certain areas have simply added more people to the roadways.

Another unwanted side effect of offering hybrid HOV decals was a rise in crime -- in California, stealing the coveted stickers quickly became a problem in many areas, especially once long wait lists blocked drivers from acquiring permits.

For more information about hybrid cars, fuel efficiency and eco-friendly driving, follow the links on the next page.