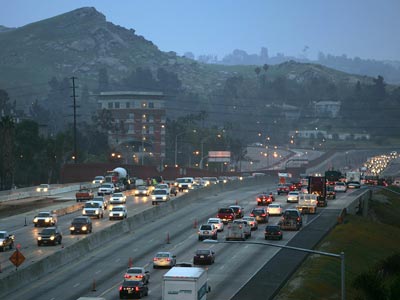 The angle on hybrid cars usually emphasizes their greenness, but do they cause pollution?
David McNew/Getty Images

In big cities where people are packed close together, streets and roads are twisted and traffic jams are inescapable during rush hours, smoggy skies can be a persistent problem. A muggy haze often builds up around most metropolitan areas, especially during the hot summer months, posing health risks for citizens. Smog may give skylines their beautiful, colored sunrises and sunsets, but it also highlights a deeper problem that some areas have with pollution.

Although smog is formed by several different sources, including power plants, industrial processes and various chemicals, one of the main causes of smog is vehicle emissions. The exhaust coming out of our cars' tailpipes, which consists of gases such as nitrous oxides, floats up into the atmosphere. When these gases combine with volatile organic compounds, smog forms. And smog in cities is just a small part of the bigger problem of global warming -- cars in the United States contribute more than one-fifth of the nation's carbon dioxide [source: Environmental Defense Fund].

The realization that current car technology coupled with a heavy reliance on fossil fuels is dangerous for the future of the environment has led many drivers to consider more fuel-efficient vehicles as an alternative to conventional cars. Although there are several different options drivers can consider when looking at alternative fuel vehicles, the most prominent type of car that has captured the public's attention is the hybrid car.

Advertising campaigns and articles often highlight the fuel efficiency and eco-friendly driving technology that hybrids offer. Although the technology varies from one hybrid model to another, most hybrid cars pair a conventional gasoline engine with an efficient electric motor that's powered by a battery. This allows drivers to stretch out how much gas a hybrid burns in between commutes, reducing emissions and saving money at the pump.

But if they're using gasoline, don't hybrid cars still cause pollution? So, how green is so-called green driving, anyway?