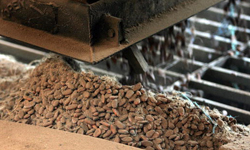 Cocoa beans begin to pile as they are unloaded from a train car outside the Blommer Chocolate Company in Chicago, Ill.
Tim Boyle/Getty Images

Not all of the alternative fuel sources on our list are disgusting like the dead cats and landfill trash. Who doesn't love chocolate? Perhaps at some point in your life, you've been indulging in a Hershey bar or some rocky road ice cream and said to yourself, "You know what would make this even better? If I could run my car off of it."

Perhaps that same thought is what led scientists at the University of Warwick in Britain to create a Formula 3 racecar that runs on the waste byproducts created when chocolate is made. "Anything with a fat in it can be turned into diesel, and that's what we've managed to do," project head James Meredith told the New York Times in 2009 [source: Motavalli].

The fuel they used comes from the Cadbury's factory in England, making research for the car extra delicious. It's a good example of how nearly anything can be used to create biodiesel fuel.

Interestingly enough, their F3 racecar was made almost entirely out of recycled and plant-based organic materials. Your fancy-pants Prius doesn't look so green now, does it?