Did airbags make cars deadlier when they were introduced? 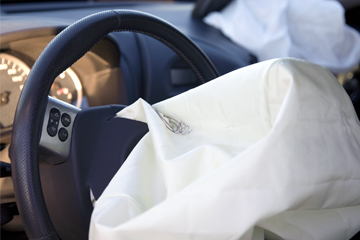 Airbags became mandatory in the mid-to-late '90s, but it took a while to bring them up to today's standards.
Victor Emond/Thinkstock

Though airbags were first used in the 1970s, it took quite some time for them to earn a reputation as a worthwhile safety device. When airbags were introduced, seat belt usage wasn't common, and well-meaning safety engineers thought airbags might be a benefit for people who couldn't be bothered to buckle up. As we now know, airbags work best when the seat's occupant is properly restrained; otherwise, the force of the bag's outward deployment is incredibly dangerous to a person who is simultaneously being thrust forward into the bag's path. These airbags weren't part of a comprehensive safety system and weren't well researched, and they earned a bad reputation, although it's hard to tally automobile collision fatalities blamed on airbags when the victims weren't wearing seat belts.

Airbag advocates didn't give up, though. Front airbags became mandatory in the United States in 1996, and that era is what automakers and auto experts generally refer to as "first generation" airbags. A lot of things were figured out in those 20 or so years. However, airbags still weren't foolproof, and auto manufacturers were afraid of the bad press that would be caused by fatal airbag deployments. The National Highway Traffic Safety Administration's records show that in 1997, 53 people were killed by the deployment of the front seat airbags in a crash [source: Edmunds]. Of those fatalities, 31 were children, which led to further overhaul of safety regulations and the modification of airbag force. However, these modified airbag deployments were still dangerous to children because their bodies are too small to handle that amount of force. One solution was to recommend that children sit in the back seat, with age-appropriate car seats or boosters, if necessary.

"Advanced" and "smart" airbags entered the arena in the early 2000s, ushered in by even more safety regulations as well as hot competition for cars with the best safety rankings. Car manufacturers were then required to equip front seats with sensors that could estimate the size and weight of the occupant, and adjust the force of the airbag's deployment accordingly. Many of these systems were inaccurate, but the manufacturers gradually got it right. And it wasn't just front airbags, either. Rear, side and curtain (or over the window) airbags joined the ranks. These new airbags had more accurate deployment systems and featured multiple chambers that were less likely to rupture.

By this time, it had been demonstrated that more modern airbags actually improved safety in car crashes. There were still more problems ahead, though. In 2014, the Japan-based OEM supplier Takata, which makes airbags for almost every major auto manufacturer, admitted that there were quality control problems, leading to widespread recalls of recent model year vehicles. The flaw would cause airbags to overinflate, making them prone to explosion. Takata later said that additional flaws in some models went back as far as 2000. The recent Takata recall shows that airbag technology may never be perfect, but they're far from the death traps they used to be.