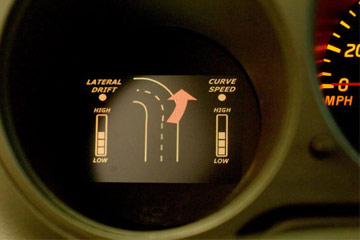 Some cars can tell you whether you're moving into another lane without signaling -- but does this technology make you safer? See more car safety pictures.
Photo by Stefan Zaklin/Getty Images

There's an old saying that any publicity is good publicity -- but tell that to a company that's been hit with a safety recall. Product recalls can cover anything from toys coated with lead paint to bacteria-tainted food. But in recent years, problems with technology have led to several automotive recalls.

For example, in 2009, Volvo recalled vehicles because onboard software wasn't sending the right signals to the fuel pump, which could cause stalls and crashes. Around the same time, Yamaha recalled motorcycles manufactured between October 2004 and April 2005 because of problems with the throttle position sensor, which could also lead to stalls and crashes [source: NHTSA, October 2009]. Not long after, Daimler Trucks recalled some Thomas school buses because of problems with LED wiring that could make the buses hard for drivers to see [source: NHTSA, November 2009].

And then, of course, there's the massive recall that started affecting Toyota vehicles in 2009. Over a period of a few months, Toyota recalled more than 5.7 million cars due to incidents of "unintended acceleration," or cars speeding out of control. A large part of this recall was technology-related, too. In the recalled cars, the gas pedal has no direct, mechanical connection to the engine through a cable. Instead, an electrical signal travels through a wire and controls the accelerator. Due to a faulty sensor in this drive-by-wire throttle system, the gas pedal could become stuck [source: Brown]. Toyota also recalled more than 400,000 Prius cars due to software in the engine computer that can make the anti-lock brakes fail [source: FOX News].

These recalls all relate to technology under the hood, and they raise an interesting question: Does this kind of technology make newer cars less safe?

The Role of Electronics in Automotive Advancements

High-tech systems started appearing in cars in the 1980s, and today, auto electronic systems and engine computers do everything from regulating fuel to diagnosing problems. Most of today's cars have between 30 and 80 separate electronic controllers [source: Cavanaugh]. Some of these devices have an obvious effect on safety. Adaptive cruise control, which slows the vehicle down if another car is detected in front of it, or lane assist systems, which warn a driver if he or she is leaving the lane without signaling, are just two examples. Systems like these raise the logical questions of whether it's a good idea to turn driving over to a computer -- and whether people will become too dependent on automation. But most of these technologies are so new, it's still too soon to tell how they really affect safety.

Other systems aren't quite as dramatic in how they affect safety. In-car computers give drivers a way to control multiple devices from inside the car. For instance, the BMW iDrive includes a knob and screen that control much of the car's audio, navigation and HVAC systems [source: BMW]. It requires the driver to look away from the road for an extended period to operate it. It's now on most BMW cars, and carmakers like Audi and Mercedes-Benz use similar automotive electronics. On Germany's stretching autobahn, it may be OK to take your eyes off the road to operate a computer, but on more crowded U.S. roads, it could present a safety problem.

These days, automotive sensors are everywhere. A sensor with a simple job, like detecting the outdoor temperature so you can see it on a display, probably isn't going to do a lot of damage if it fails. But automotive sensors also perform critical tasks that directly affect safety on the road. A sensor might measure the angle of the car to keep it in the right gear while accelerating. Or, sensors might sense slipping wheels in bad weather, signaling the car to turn on electronic stability control.

Like a glitch in any computer system, it's possible, but unlikely, that something could go wrong with automotive sensors -- or the hardware and software connected to them -- and cause safety problems. However, so far, these systems seem to help rather than hurt. Stability control is so good at preventing rollovers, the Insurance Institute for Highway Safety says they can prevent single-vehicle fatal wrecks by up to 51 percent [source: IIHS]. In addition, if these auto electronic systems fail, many of them have mechanical systems to pick up the slack -- like the brakes, for example.

Because these systems are so central to safe driving, when they fail, they can make major headlines. However, it's important to note that most recalls reported by the National Highway Traffic Safety Administration (NHTSA) still relate to vehicles' physical components, like welds, insulators, tie rods and mounts, rather than to chips and software [source: NHTSA: Defects and Recalls].

Can Your Car Have Too Many Bumper Stickers?
Should Licensed Drivers Be Tested Periodically?
How Occupant Classification Systems Work