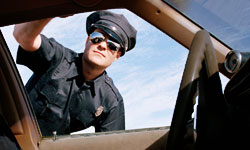 Do you know what to do when you're pulled over by a police officer? See more pictures of police.­
Matthias Clamer/Getty Images

The United States is a country that loves to drive. Although cities such as New York and Washington D.C. have excellent public transportation systems, millions of Americans still drive as part of their daily commute. And even though most drivers are licensed, having passed a written test and a driving exam, many drivers make occasional mistakes, while some openly flout the law. The result is that millions of traffic tickets are issued in the United States every year. With the fines for many tickets costing more than $100, that makes traffic tickets a billion dollar industry. Some critics of the traffic ticket system say that it doesn't ensure safety and only encourages police officers to satisfy ticket "quotas." Even so, tickets are intended as a deterrent and knowing how traffic tickets work is important whether you're fighting a ticket in court or trying to better understand the traffic laws. In this article, we'll look at how traffic tickets work, the different types of offenses and what to do when you're pulled over by a police officer. We'll also pass along some tips on how to avoid tickets and how to contest a ticket in court.

Generally traffic law is broken up into infractions and violations. An infraction is an offense that is not considered a crime and its penalty is a fine. A person who is guilty of an infraction can't be jailed, receive large fines, have a jury trial or a court-appointed lawyer. Most traffic tickets, such as non-moving violations and non-dangerous moving violations, are infractions. Some speeding tickets can still be relatively large, as many states determine the fine based on how many miles per hour beyond the speed limit the offender was driving.

A violation is more severe than an infraction, and though its definition differs between states, it is usually considered a crime. More serious violations are classified as misdemeanor or felony traffic violations. These include DUI, reckless driving, driving without auto insurance and failure to stop at the scene of an accident. Suspects who are charged with a misdemeanor or felony traffic violation have all the normal rights afforded to criminal defendants. They undergo the booking and bail processes and have the right to a jury trial and a court-appointed attorney.

Although they've created some controversy, automated cameras are becoming increasingly common at busy intersections and are used to catch drivers who run red lights.

An offender will usually be charged with a misdemeanor or felony if the traffic violation caused, or threatened to cause, injury to a person or property damage. A traffic offense can move from infraction to violation, depending on the circumstances. For example, running a stop sign may only be an infraction, but if running a stop sign results in a pedestrian getting hit, the infraction may be classified as a misdemeanor or even a felony. A felony is a serious crime. If convicted of a felony, at a minimum, you would face a year imprisonment. A felony can also result in a death sentence. Repeat DUI, hit and run and vehicular homicide are all examples of felonies.

Traffic law differs from state to state, so it's important to familiarize yourself with the laws where you live. Still, in most states, there are three basic types of traffic offenses.

Now that we've gone over ticket types and some of the legal facts surrounding traffic tickets, let's consider what to do when you're pulled over by a police officer.