What to Do When You're Pulled Over 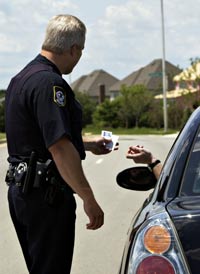 Officers will ask to see your drivers license and registration during a traffic stop.
Photo courtesy Stockxpert

The flashing lights of a police car in a rear view mirror fill most motorists with dread. “Am I really being pulled over?” you might wonder. Although no one likes being pulled over, it’s essential to show a police officer that you’re cooperating. From the moment those lights come on, the officer is observing your behavior, and the way you respond may affect whether or not you receive a ticket. So as soon as you see those flashing lights behind you, turn on your right turn signal and pull over to the right as quickly -- but also as safely -- as possible. Again, it’s important to show the officer that you’re cooperating, and by stopping near where the violation occurred, you may have a better sense of what happened. You will also be able to make observations about the area that can help you if you contest the ticket, such as noting an obstructed speed limit sign or that a new yield sign is in place.

Once you have safely pulled over, turn off the engine, roll down your window all the way and place your hands on the steering wheel. If it’s dark, turn on the interior light in your car. Don’t make any sudden movements, and don’t rummage through your belongings looking for your wallet until you are asked for documentation. Remember that law enforcement officers are killed every year while conducting routine traffic stops, so it’s understandable that an officer may treat you with suspicion. Respond accordingly by being cooperative and do not give any cause for alarm.

It’s OK to greet the officer, but it’s wise to wait for the officer to ask you a question. He or she will likely ask for your driver’s license and vehicle registration. It’s important to give the officer these documents when asked and not question why. However, if you are pulled over by an unmarked car or aren’t sure if the person is a police officer, it’s acceptable to wait to roll down your window until the person has identified himself or herself as an officer.

When talking with the officer, don’t admit any guilt. It’s acceptable to give simple “yes” or “no” answers to questions. If an officer decides to give you a ticket, his or her mind is already made up, and it’s very unlikely you’ll be able to argue your way out of it. Anything you say could later be used in court, should you choose to contest the ticket, so be mindful of what you say. Never try to bribe the officer -- this is not only highly unethical but it is also a crime. Also, you can’t pay the officer the fine for your ticket during a traffic stop (tickets are generally paid for through the mail or online), and attempting to do so could be accidentally construed as a bribe.

During a traffic stop, an officer can only search your car if there’s probable cause to believe you’re concealing something illegal or if he or she believes that you are dangerous. Before approaching a motorist he or she has pulled over, an officer usually looks for movement in the front seat , something that would indicate that the driver is attempting to hide something underneath a seat or in a compartment.

If an officer asks you to get out of your car, it’s once again important to cooperate. Once you are out of the car, the officer may pat you down, and if anything illegal or suspicious is found, he or she may then search your car. If your car becomes impounded, it can also be legally searched then.

An officer might ask you to sign your ticket, but depending on state law, you may not have to. Signing a ticket is not an admission of guilt. It just means that you agree to pay the fine or to appear in court.

So let’s say you get a ticket. What’s on the ticket, and what can you do about it? Read on to find out.