Dealing with a Traffic Ticket 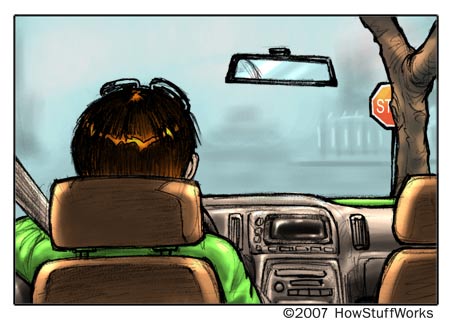 An obstructed stop sign like this one may be cause for a judge to dismiss your ticket for rolling through the intersection.

What's on a ticket?

A traffic ticket should have the following information on it:

Different jurisdictions have different forms, so the appearance of the ticket and its content may vary slightly. However, if an officer wrote down incorrect information, that may prove useful in a court defense.

If you plead guilty to a traffic charge, you will have to pay the maximum fine and the charge will be on your DMV record for three years. It may be in your best interest to plead guilty, but you can also consult a traffic ticket attorney for advice regarding your case. A fine for a routine moving violation can be $75 to $400. In some states, fines increase if you have a poor driving record or recent tickets for the same offense. For speeding, the fine is generally based on how much you exceeded the speed limit, though fines can be increased or even doubled in school and construction zones. Usually the amount of the fine will be written on the ticket, but you may have to call the local court to learn the exact amount.

Contesting a Ticket in Court

If you're planning on contesting a ticket, it's important to be prepared. Read and study the law under which you're charged. Keep in mind that as a motorist you're required to know the law. Just as you can't say, "I didn't know murder was illegal," it doesn't matter if you claim, "I didn't know crossing a double yellow line was illegal." If possible, take pictures of the area or intersection where you were ticketed. If there were any witnesses, contact them and ask them to testify on your behalf.

When in court, it's best to plead not guilty. Even if you may have broken the law, pleading not guilty means that it can't be proven you committed the act in question. You can also hire an attorney, but most tickets you can defend on your own if you are prepared and have the proper information. If you have an out-of-state ticket and cannot attend the hearing in that state, hiring a lawyer in that jurisdiction can be a great help and possibly prevent you from having to make the trip back to where the ticket was issued. And if you're facing a license suspension or criminal charges, definitely hire a lawyer or request to have one appointed to you if the law allows.

During the pre-trial process known as discovery, you have the right to request the ticketing officer's notes on your traffic stop. Most officers write down notes about each ticket they write, and examining these notes lets you see if they left anything out or if some detail can be disputed. Hopefully you didn't make any incriminating statements or admissions of guilt to the officer when you were pulled over, as these might be recorded in his or her notes.

If you were cited for not having your license on you, this ticket can usually be contested simply by producing a license in court that was valid when the ticket was issued. If the ticket was a subjective determination, such as that you made an "unsafe" turn, you can challenge the officer's observations. Since you will have the opportunity to question the ticketing officer, prepare a list of questions that can cast doubt on his observations or ability to see the scene clearly. Some examples:

Present a diagram of what you think happened and photographs of the scene that show road conditions and any unusual features, such as a stop sign obscured by trees. Such material may help you construct what's known as a mistake of fact defense. A mistake of fact means that you made an honest and reasonable error -- lane lines or crosswalk lines were faded and difficult to see; a new stop sign was placed on a road you frequently travel.

Claiming that you lost concentration or got distracted is not a valid necessity defense.

A third type of defense involves claiming your conduct was legally justified. For example, if your car was malfunctioning or making strange noises, and that's why you slowed down significantly on the freeway, a judge may accept that explanation.

If there were any witnesses to your traffic incident, you may want to ask them to testify in court.
Image courtesy ©2007 Microsoft Corporation

If you are found not guilty, the judge will dismiss your ticket and return any fines already paid. If found guilty -- essentially meaning that the ticket is upheld -- you will have to pay the fine and you may have points placed on your license. If the case involves a misdemeanor or a felony, you may also face jail time and other penalties.

Some tickets are almost impossible to contest. Tickets from red light cameras come with photo documentation that is difficult to refute. Some areas have automated speed enforcement systems that work much like red light cameras, taking pictures, producing a speed measurement and sending the ticket through the mail. For information about the locations of red light and speed cameras, try this Web site.

It may seem like too much of a hassle to contest a ticket. In some cases, it may not be worth it. But if you genuinely believe you have a case or if you can't afford any more points on your license (more on those soon), then it may be a good idea. In any case, it's important to either pay your ticket or go through the process of contesting it. Doing nothing about a ticket can result in an increased fine or even a bench warrant being issued for your arrest, and a suspension of your license.

Now, say you couldn't get out of the ticket. Let's look at how that will affect your driving record and insurance.