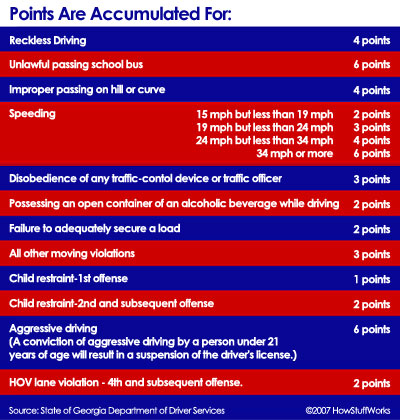 The graphic above illustrates point values for traffic violations in the state of Georgia. Check your state DMV's Web site to learn the point values where you live.

Each state has a system that assigns point values for traffic offenses. If a driver accumulates a certain number of points in a given time frame (perhaps a year), his or her driver's license can be suspended. Insurance companies will also raise premiums for points on a license, and you can get tagged with labels like "high risk driver." Here are the point values for Georgia, HowStuffWorks' home state:

If you accumulate enough points to face losing your license, you will generally be allowed a hearing in front of a "hearing officer." At the hearing, you can explain the past tickets and account for any mitigating circumstances. You should also explain why any tickets weren't contested. Share what you're doing to be a better and more careful driver. If you drive more than average (more than 15,000 miles a year), explain how that may increase your risk for being ticketed. Is your job dependent on driving, or does your family depend on your ability to drive? If so, that may help you to retain your license.

If your license is revoked, you will have to wait before reapplying and may have to have a reinstatement hearing or to take the driver's license exam again.

If you pay your ticket and go to traffic school, the points from the traffic offense will not go on your record. While this process involves spending six to eight hours in traffic school and paying for that traffic school, it can be well worth it to avoid the increased insurance premiums. And if you have a job that requires a clean driving record, traffic school may be the only option when you are facing points on your license.

Traffic school may seem like an inconvenience, but it's a route that provides more certainty than contesting your ticket in court. The policies on when you attend traffic school vary between jurisdictions. Some allow attendance of traffic school once a year, while others are more strict at once every 18 to 24 months. If you were ticketed for driving at least 15 miles per hour over the speed limit, local law may prevent you from attending.

Some states allow you to complete online traffic school, but others require that you sign up through a court clerk or to appear before a judge. Generally, some form of proof is required, such as a certificate, to show that you've completed traffic school.

Traffic schools, in an effort to attract customers, frequently employ eccentric and humorous methods. There are many comedy and improv traffic schools out there, and other possibilities exist to liven up a day full of traffic laws.