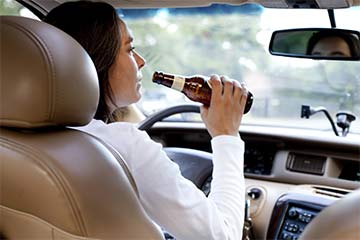 Which is worse: driving while drunk or stoned? The answer might surprise you.
Star flamedia/iStock/Thinkstock

When the red and blue lights begin flashing in your car's rearview mirror, your stomach sinks. And then panic sets in. You don't have any weed on your person, but you smoked a bowl before leaving a friend's low-key party. Desperate, you reach for the air freshener and rub it on your shirt just as the officer exits the patrol car.

As you find yourself outside your vehicle performing the perfunctory sobriety tests -- following a moving pen with your eyes, walking heel to toe and standing on one foot -- your sense of impending doom fades, and you feel a glimmer of hope. You may be completely baked, but you're sailing through these assessments like an Olympic gymnast.

So, with all these stoned drivers, are they any more dangerous than drunk drivers?

It's clear marijuana use negatively affects one's ability to drive, making a person twice as likely to get in an accident. However, the odds are demonstrably worse when drinking and driving. An analysis of federal crash data finds that drivers who are young (20-something) and at the legal limit for driving (blood alcohol content of .08 percent), are 20 times more likely to get into a deadly accident than their sober peers. The increased risk remains for older drivers, too. Even up to age 34, they are nine times more likely to die in a car accident when driving with a blood-alcohol content of .08 percent. Once this legal limit is surpassed with another drink or two, the odds of fatality only increase.

The difference in outcomes for stoned drivers versus drunk drivers lies in the way stoned drivers act behind the wheel. While drunk drivers tend to speed and make risky decisions, stoned drivers lollygag along and play it safe. They're more likely to be stopped for driving far below the speed limit than for surpassing it. Plus, marijuana enthusiasts often toke at home, which lessens the odds of them driving around stoned in the first place [source: Koerth-Baker].

Some even credit the legalization of marijuana with making roads safer. For example, a review of 13 states that approved medical marijuana legislation between 1990 and 2009 found that traffic deaths decreased by an average of nearly 9 percent. Some speculate that as the use of marijuana increased in those states, the use of alcohol may have decreased. What's more, several studies report that smoking a small amount of marijuana -- about a third of a joint -- has little impact on a driver's ability behind the wheel. Those who are habitual pot smokers can tolerate moderate doses of THC with little negative affect on driving performance. However, drivers with very high levels of THC in their bloodstream had trouble staying in their lanes and responding to unexpected obstacles [sources: Sandell, Palmer].

While some studies may show that driving stoned is no worse than driving drunk -- and that marijuana use may even offer an edge when it comes to maintaining slow speeds -- the best policy is to refrain from getting behind the wheel at all if one's sobriety is in question. And mixing alcohol and marijuana makes you an even more dangerous driver than just being drunk.

The research on this was surprising. I didn't expect to find such differences between alcohol and marijuana when it comes to getting behind the wheel. The fact that most marijuana enthusiasts partake at home rather than at the club -- and are thereby able to avoid the risk of driving while impaired -- was especially poignant.

Can Your Car Have Too Many Bumper Stickers?
How to Escape a Sinking Car
What's the Point of Car Alarms If Nobody Calls the Cops?