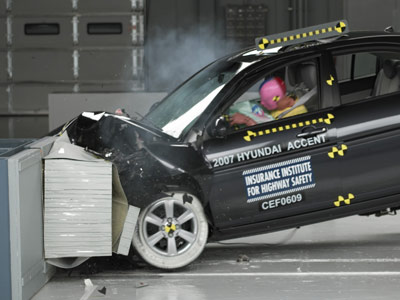 This crash test is one of many tests that automakers conduct to assess the quality and performance of their cars. See more car safety pictures.
Insurance Institute of Highway Safety/AP

Producing cars and getting the public to buy them is a demanding and highly competitive business. Manufacturers agonize over ways to make their cars, trucks and SUVs even marginally better than another company's vehicles.

Carmakers go to great extremes in attempts to keep a lid on those advancements before they're ready to be made public. You may have seen pictures in auto enthusiast magazines of prototype cars clad in black vinyl and fitted with false bulges to distort the car's true appearance and capabilities.

If they're so secret, why let the cars out in public at all?

To make sure their cars live up to the consumers' standards and one-up competitors, car makers test their cars in all types of environments. While much testing can be done on closed tracks, real-world car testing needs to take place in real-world conditions. By combining data from the track with information gleaned from driving on public roads, automakers use testing to create vehicles that they hope will satisfy the market.

­This broad process covers everything from performance and comfort to reliability and safety. It also encompasses quality and appearance. The idea behind car testing is that it allows manufacturers to work out all the kinks and potential problems of a model before it goes into full production. It's much cheaper to eliminate a problem with a product before you begin mass producing it than it is to discover problems and try to fix them afterward.

In this article, we'll t­ake a look at some aspects of car testing, and how it raises the bar on automotive design and manufacturing. Testing and tweaking makes it possible for cars to get better each year, while prices remain stable or even decrease for the same set of features.

At the end of the day, though, car testing is all about abusing a vehicle to find its limits. 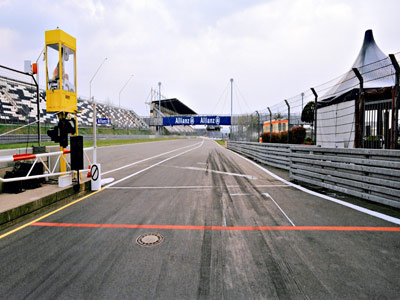 The Nurburgring race track in Germany is one of the most well-known car testing sites in the world.
Kai Stuht von Neupauer/Getty Images

If you own a car and aim to keep your repair and maintenance bills low, chances are that you take extremely good care of it. That is, you drive it moderately and modestly and have it serviced regularly. You avoid driving it in extreme conditions, like exceedingly hot or numbingly cold weather, whenever possible. You might keep it in a garage. The stresses of hard driving, harsh temperatures and environmental exposure take their toll on a car. Anything an owner can do to reduce these conditions increases the car's life expectancy.

In car testing, the idea is precisely the opposite. Manufacturers attempt to flog the pre-production vehicles they test to flush out problems and fix them. They want to fix problems themselves, before consumers have a chance to experience any problems and complain. To do this, the carmakers seek out tough environments such as Death Valley in the United States, private testing facilities owned by third-party companies, or the famed Nurburgring race track in Germany, to name some examples.

In addition, manufacturers make their cars available to certain media outlets to get their test drive impressions and to create buzz around groundbreaking automobiles before they go on sale for consumers.

Car testing tends to generate conversation around most new vehicle prototypes, but perhaps the most exciting testing takes place with high-performance vehicles. At Germany's infamously challenging Nurburgring test track, the world's fastest production cars attack a twisting road course between 13 and 15 miles (21 and 24 kilometers) in length, depending on the track configuration used.

Testing at Nurburgring and at other high-speed tracks helps automakers gather information about the test car's acceleration, braking and handling capabilities. It has also become something of a marketing tool, as the top manufacturers seek to topple the incumbent record holder each year. These bragging rights then make their way into a vehicle's marketing materials, with the intention of enhancing the prestige of both the model and the brand.

With several dozen major automobile brands around the world in existence, there's bound to be competition for testing resources. For the most part, the manufacturers have adopted a policy of peaceful coexistence at testing areas, having adopted "gentlemen's agreements" not to harass one another or record specifications of competitors' vehicles.

This does not mean, however, that automakers let their guards down when testing their cars in public.

Go to the next page to read about the cat-and-mouse game that auto engineers are forced to play with spies.

Auto Spies on the Prowl 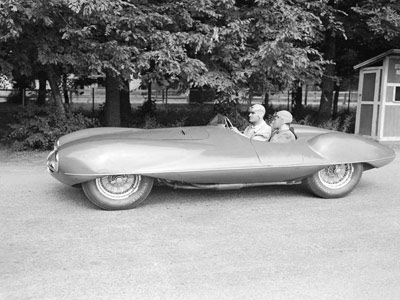 Secret car testing has a long and storied history. This Alfa Romeo was snapped during testing in Italy in 1952. The car wouldn't make its debut until the Le Mans Grand Prix in France a few days later.
STF/AP

In Hollywood, celebrities find themselves perpetually hounded by paparazzi, those intrusive photographers and videographers who jostle one another and their subjects for the perfect shot. These images sell for hundreds or even thousands of dollars to magazines and tabloids, and Web sites worldwide.

The situation is similar in the world of automotive photography, except that these spy photographers are hunting for new and previously unseen cars instead of overexposed starlets. With so many car magazine titles out there, editors place great value on presenting information to their readers before competitors have a chance to do so.

Spy photographers are usually independent contractors. They stalk their prey by driving to locations where they expect engineers to be testing prototype vehicles. Then, they set up their equipment -- expensive cameras with massive telephoto lenses.

Car magazines pay decent rewards to photographers that bring back compelling photos of new and secret automobiles. Compensation can range from $500 to $900 for a good spy shot [source: Woodyard].

While photographers often obtain their pictures covertly, they can get up close and personal with the vehicles to try to capture more detail. Sometimes, the situation can turn tense, as the engineers who do the testing are tasked with keeping the cars as secret as possible. Sometimes they will crowd around a test car to shield it with their bodies. Sometimes they will cover the cars with a shroud.

Frequently, manufacturers will attempt to camouflage the design of their test vehicles by applying black vinyl to their surfaces. To further confound photographers and competitors, carmakers might add foam body inserts to conceal the car's true shape. Another trick is to cover the car in complex patterns that confuse the eye (and the camera). Manufacturers will even go so far as to cover up any markers, medallions or other logos, both inside and outside the car, that might indicate who made it.

Go to the next page to find out exactly how the test procedures themselves work, who carries them out, what they measure and what they accomplish.

Testing a car in the United States is a long, expensive and often tedious process. The manufacturers' goal is to make a vehicle that meets established government safety standards, that will stand up to normal consumer use while incurring minimal warranty claims and will hit that sweet spot between customer demand and profitability.

One of the more well-known tests is crash testing. You may know the slow-motion films of cars being crash tested with dummies inside "playing" car passengers. Depending on the purpose of the film, the mannequin either goes flying through the windshield, or is protected by a car seatbelt and airbag. Manufacturers like to sound the proverbial trumpet when one of their vehicles, especially a family-oriented vehicle, scores well in government and independent crash-safety tests.

In the United States, the two main bodies that conduct crash safety testing are the Insurance Institute for Highway Safety and the National Highway Traffic Safety Administration. Both operate independently of the automobile industry.

In addition to crash testing, automakers must track a plethora of quality measurements. These tests are conducted by the manufacturers themselves to refine their vehicles as much as possible. Here are a few questions that manufacturers may tackle:

If that seems like a lot to keep track of, that's because it is. However, automakers typically assign specialized teams to address each one of these questions so that they can come up with the best solutions in short order.

Depending on what's being measured or tested, engineers can make changes on the spot. In other cases, test findings may require an extensive rethinking of how a part or set of parts function. To make sure the entire testing process stays reasonably on schedule, manufacturers make multiple "test mules," or pre-production cars, for testing. This way, multiple systems can be designed and experimented with at once.

Not all manufacturers follow the exact same test procedures for all their cars, trucks and SUVs. Find out how these procedures differ on the next page.

Testing automobiles is expensive. The automobile prototypes, or test mules, can cost several hundred thousand dollars, even for so-called economy cars. Furthermore, it requires paying the salaries of teams of engineers, paying for the costs of special measuring equipment, and shelling out for meals and accommodations for these small armies when they must conduct their experiments away from their main offices.

Sometimes manufacturers get valuable design and engineering data from sources outside of their official test programs for preproduction vehicles. Some of these sources include:

For all their contributions to automotive advancement, test cars almost always meet an unpleasant fate. Since they're typically unfinished works that can't be sold and put under warranty, most test mules are simply sent to the crusher once their work is done. This fate was made controversially apparent in the documentary "Who Killed the Electric Car?" After General Motors decided to abandon the EV1 electric car program against the wishes of EV1 supporters, the company faced a storm of controversy as they hauled the vehicles away to be destroyed.

Ford faced similar outrage in 2004, when it decided to pull the plug on its electric car experiment with its Think model, which it had leased to customers willing to test it. A public relations nightmare for Ford ensued when word leaked that the company planned to destroy the cars after the three-year test period. The company eventually relented by agreeing to ship the cars back to Norway where they were produced [source: Associated Press].

While those particular decisions were socially and politically charged because of their environmental overtones, the fact is that test cars are routinely destroyed once manufacturers no longer need them.

For more information on how cars are tested, go to the next page.

Can Your Car Have Too Many Bumper Stickers?
How to Escape a Sinking Car
What's the Point of Car Alarms If Nobody Calls the Cops?