Can airbags kill you? 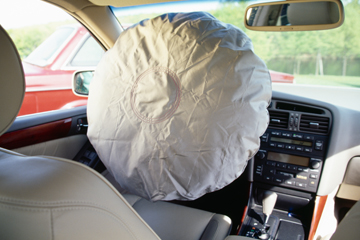 There's no doubt that airbags are one of the great achievements in automotive safety technology. But could they actually end up hurting or killing the people they're supposed to protect?
Patti McConville/Getty Images

The whole premise of an airbag just sounds good, doesn't it? Instead of colliding with your car's steering wheel, dashboard or door, you get cushioned by a pillow of air. While airbags aren't exactly as cuddly-soft as a bear in a toilet paper commercial, making contact with one sure beats making contact with a steel panel. Since 1998, front driver and passenger airbags have been required equipment in all cars and trucks sold in the United States. Between 1987 and 2008, it's estimated that frontal airbags saved more than 25,000 lives in the U.S., making them one of the great achievements in automotive safety technology history [source: NHTSA]. Now there are cars with 10 airbags, and some car companies have even incorporated airbag technology into their seatbelts [source: Consumer Reports]. But could airbags actually end up hurting or killing the people they're supposed to protect?

Anyone who's been in an accident in which the airbag has deployed can tell you that the event is extremely violent. It has to be: Airbags need to get in front of the person they're protecting and fully inflate before that person makes contact with something more harmful than the airbag itself. The average driver's side airbag inflates in 20 to 30 milliseconds, exploding out of its housing at 200 miles per hour (322 kilometers per hour) [sources: Huffman, DMV]. In fact, the technology used to deploy airbags is similar to the technology in some rocket boosters.

Airbags exert a lot of force, so it is possible to be hurt by one. Sitting too close to a deploying airbag can result in burns and injuries. Using an airbag without a seatbelt or having something between you and the airbag (like a pet, a glass bottle or even a cell phone) can also result in serious injury. The people most at risk of death from airbag deployment are children and small adults, because their bodies can't take the force. Moreover, most children ride in child safety seats, which aren't designed for use with airbags. Seat type and positioning can also put a child at risk. Rear-facing child safety seats, for example, should never be used in the front seat of a car because an airbag could cause serious injury or death if it strikes the back of the seat.

Airbags undoubtedly save lives when they're used properly, and they pose little risk to adults. If you must have a child ride in the front seat of a vehicle, and if your car is so-equipped, you can switch the front passenger airbag off fairly easily — the instructions are in your owner's manual. Under certain, very specific circumstances, you may also take your car to a mechanic to have the passenger-side airbag switched off [source: NHTSA]. If you're concerned about side airbags in the rear seat of your car, you can have your child sit in the middle seat position.