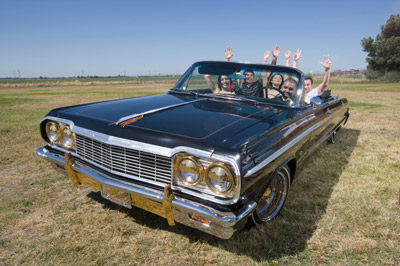 Because of their modifications, lowriders have some special needs that make them a little more difficult to own and drive than other cars. The rubber bladders in the suspensions are tough, but they must be checked for leaks. If the suspension is adjustable, it uses hoses to raise or lower the car, and those hoses can spring a lot of leaks. And while making a car hop or dance looks cool, it's actually pretty rough on the car (just like jumping up and down repeatedly on a hard surface can damage a person's joints or bones).

Rough roads and speed bumps are particularly hard on lowriders, unless the car has a height adjustable suspension. A car with a lowered suspension (or an adjustable suspension in the lowered position) doesn't have the space the suspension needs to move when it encounters a bump or dip in the road. That leaves the car vulnerable to scraping its undercarriage, or everything underneath the car. Scraping the undercarriage repeatedly, or scraping it particularly hard, can lead to some expensive damage to the frame, exhaust system and suspension.

Aside from avoiding bumps, lowriders don't drive much differently from other cars. While lowering a car's suspension typically leads to improved handling, that usually isn't the case for lowriders. Though lowering the car's center of gravity makes it more stable, other suspension modifications, like upgraded anti-sway bars (which contribute to vehicle steering and control) are needed to make the car handle better. Common lowrider air or hydraulic setups don't help much with maneuvering since their point is to make the car look cool. And since lowriders tend to be built out of old, large cars, they don't handle too well to begin with. Gas mileage is another consideration: Suspension modifications add a lot of weight to the car, which has a negative impact on fuel economy. But, since most lowriders are show cars, not commuters, most owners don't worry about how well they corner or how many miles per gallon they get.

Though laws vary, most states don't regulate modifications that can be made to cars -- as long as the car can pass a safety inspection. Some lowriders get into trouble for having windows tinted too darkly, or playing a stereo too loudly, but beyond that, most states let people modify their cars however they wish. But before buying or building a lowrider, you should investigate the laws in your state to see what, if any, issues you might run into.

To learn more about lowriders and car suspensions, cruise over the links below.