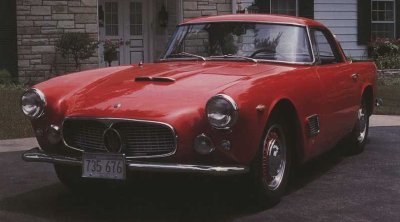 The Maserati 3500GT was Maserati’s breakthrough car, and began a streak of highly successful sports cars.

Maserati is synonymous with hot-blooded Italian automobiles, and the sports cars featured in the pages that follow are some of the best of the breed. But first, let's get started with a little history.

Maserati is the family name of six brothers from Bologna, a car-building clan that gained renowned when their Tipo 26 took first in class in the 1926 Targo Florio, the demanding Sicilian road race.

Throughout the 1930s, the cars and engines built by the Maseratis were among the fastest, most technically advanced, and most beautiful sporting machines of their age. Their production-based machines won the biggest European road races, and one of their single-seater even won the Indianapolis 500 in 1939 and 1940.

Postwar financial pressures forced the brothers to sell out to deeper pockets; they went on to form Officine Specializate Costruzione Automobili (OSCA) in 1947 and to build racecars into the 1960s.

The Maserati marque, meanwhile, passed through a succession of owners, the name remaining associated with competition glory on such luminaries as the F1-chamption 250F and the Birdcage sports racer. A small number of road cars wore the Maserati trident after World War II, but the breakthrough was the 3500GT of 1957, an elegant coupe powered by a race-worthy inline-six.

The Sebring coupe and convertible and the striking Giugiaro-styled Ghibli were among the succeeding Maseratis to follow this formula before the next breakthroughs, the midengine V-8 Bora of 1971 and V-6 Merak of 1972.

Led by the Biturbo series, Maserati relegated his sporting instincts to coupes and convertibles through most of the 1980s and 1990s. Ownership by now was under the giant Fiat group, and for a time, Maserati was partly controlled by another Fiat holding, none other than its old rival, Ferrari.

We'll get started in the next section with the Maserati A6/1500.