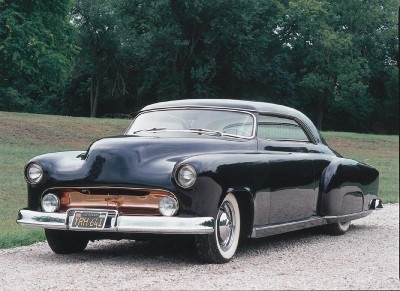 Harry acquired a 1951 Chevy Bel Air hardtop in 1954 when he was still in high school in La Jolla, California, (hence the car's name). Part of the deal was a promise to his parents that he wouldn't modify the car.

But as Harry put it in a 1985 ­article in Super Rod & Custom magazine, "They had gotten to me -- 'they' being Pinin Farina, Harley Earl, Joe Bailon, the Barris brothers. My parents didn't have a chance against the likes of them." Harry immediately began an extensive customizing process.

Every panel of the body received some customization. Harry dechromed the hood, then had friend Herb Gary pancake it, a process that involves molding in the hood, then cutting out a smaller panel from the flatter top portion. Harry installed an electric motor and twin screw drives to open and close the new hood.

After the top was chopped about three inches, Harry straightened the doors' upper lines and reskinned them. He modified the A-pillars to match the doors' new shape and installed custom-made one-piece glass in each door.

To match the new windshield opening, Harry had new lower moldings cast in lead and chrome plated. The sheetmetal around the backlight was replaced with a piece cut from a 1949 Plymouth that was narrowed and sectioned. The new opening was ­fitted with a 1953 Pontiac windshield cut to fit.

Up front, Harry frenched the headlights, installed a 1949 Mercury grille opening, and fashioned a grille from copper. He also smoothed the bumper, removed the bumper guards, and added a 1949 Chevy license plate guard.

These floating rocker panels were among most unique custom elements.

Out back, he pancaked the trunk as well and chose to utilize a continental kit. To work it in, he extended the rear fenders and installed hand-cut clear taillight lenses. The rear bumper came from a 1952 Pontiac.

Perhaps the most unique elements of the La Jolla are the "floating" rocker panels. To make these, Harry and Herb cut new rockers and 1-1/2-inch thick frosted-white Plexiglas to match. They installed the Plexiglas, then added the new ­rockers over the top.

This created a more flowing line into the rear fenders. For an additional touch, Harry added LEDs at the leading edge of the plexiglass panels, causing them to glow like a lens at night.

At the time, lowering a custom usually involved installing lowering blocks that harmed handling characteristics. To avoid any handling and ride penalties, Harry lowered his car by channeling it behind the rear seat.

To do so, he cut the frame ahead of the rear springs, raising the rear end 3-1/2 ­inches within the body and thus lowering the rear suspension. Simple suspension modifications were made to lower the front end.

Stricken with polio at a young age, Harry couldn't drive a conventional car, so he had friend Floyd Martin make hand controls for the throttle and brakes. Under the hood, Harry installed a new 283-cid Chevy V-8 engine. For paint, he chose a deep chocolate-ebony candy pearl color.

The La Jolla is unique among custom cars in that Harry owned it for more than 45 years, driving it much of the time. It followed him through college, family, and his automotive design career.

When restored, the interior of La Jolla was redone in white and light lavender upholstery that complemented the car's new dark purple exterior.

For the inside, Jack had Harry design a new rolled-and-pleated interior, which was rendered in white and light lavender by Bob Sipes. And outside, instead of brown, Jack had the car painted dark purple, a color that Bradley favored even in the 1950s.

The car toured the custom auto-show circuit for a while before retiring to Jack's stable of historical customs.