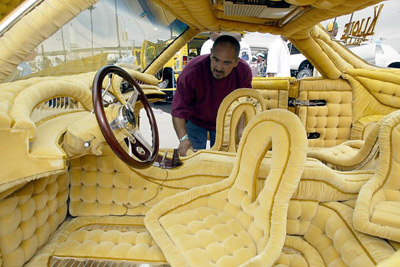 Most lowriders have simple interiors to keep the focus on the outer car, but this 1979 Chevy El Camino breaks the mold.
Hector Mata/AFP/Getty Images

A lowered suspension isn't the only modification that makes a car a true lowrider. Switching stock wheels for larger ones is an easy change that most lowriders make to their cars. The larger wheels fill up the wheel wells -- especially when they're paired with a lowered suspension. Larger wheels also show off decorative rims or flashy metal work on the wheels themselves. However, larger wheels require thinner tires. As a wheel gets bigger, the rubber on the outside of the tire gets thinner -- otherwise the whole setup won't fit in the wheel well. Since there's less cushioning, thinner tires usually mean a rougher ride, but the visual payoff is enough to make larger wheels a lowrider signature.

Paint is also extremely important for completing a lowrider's look. As a general rule, paint on lowriders is flashy. Bright colors that would almost never be seen in any car showroom are common. Multiple colors on a single car, as well as pinstriping (thin stripes used to enhance a car's lines or form) are techniques that lowrider owners use to make their cars stand out. Some lowriders feature metalflake paint, plaint flecked with bits of shiny metal. The metal reflects extra light, giving the car a sparkly, disco ball look.

Some lowriders also make changes to their cars' bodies. A common modification is chopping a car's roofline. When a car is chopped, the roof is removed along with several inches of supporting metal. The roof is then replaced, giving the appearance that it's been lowered. Modifiers may also change the rake (angle of their car's windshield) or take a four-door car and turn it into a two-door.

Lowrider interiors are no less important than their exteriors. While outrageous interior materials and gadgets get a lot of attention, some lowriders prefer simple interiors, so the focus stays on the outside of their car. However, one thing is fairly standard to most lowrider interiors: a powerful stereo system.

A loud stereo is important for lowriders because it allows the car to provide its own music for dancing. It also means that the car can play music for an entire gathering. Since lowriders are commonly shown outside in a festive atmosphere, a loud stereo is a pretty practical modification.

How does a lowrider handle in daily life? Go to the next section to find out.