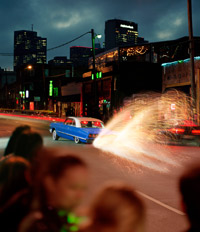 A lowrider in Dallas bounces down the street.
DreamPictures/Photodisc/Getty Images

A lowrider is a car or truck that's had its suspension modified so that the car rides lower to the ground. Popular models for modification include Chevrolet Impalas from the 1960s as well as 1970s and '80-era Chevrolet Monte Carlos, Buick Regals and Oldsmobile Cutlass Supremes. Classic 1950s and '60s Ford and Chevy trucks, as well as the Chevy El Caminos are also popular.

In addition to their lowered suspension, lowriders often also feature flashy paint jobs, ornate rims and interior modifications like luxurious and eye-catching materials and large stereo systems. Some lowriders further modify their suspensions, allowing the car to buck up and down -- something that's known as dancing or hopping.

Before you understand how a car's suspension is lowered, you need to understand how a suspension works. A suspension protects the car and allows it to perform at its best by absorbing bumps and imperfections in the road's surface. Think of a suspension as a car's joints. Joints, like your knees and ankles, flex, allowing you to move comfortably and efficiently. If you jump, you bend your knees to cushion yourself as you land. A car's suspension flexes like your knees to cushion the ride. Similarly, you can bend your knees and shift your weight between them when you need to turn a corner or change direction (just try to walk around a corner without bending your knees -- you'll be in for a slow and uncomfortable time!). A car's suspension does the same thing: It allows the car's weight to shift around, maintaining speed and balance.

Car suspensions are typically made of two main components: springs and shock absorbers. Springs can come in many different forms, but the most common are coil springs (which look like the springs you see in cartoons) and leaf springs, which are flexible pieces of curved metal. Shock absorbers usually use a spring and a chamber filled by a piston, as well as a gas or liquid. The spring moves the piston up and down and the gas or liquid provides resistance, which keeps the car from bouncing or floating around too much.

So how do lowrider suspensions actually raise and lower a car? Go to the next section to find out.

Lowrider shows, where lowriders bring their cars to compete, are great places to checkout lowriders, get ideas for modifications and experience lowrider life. The shows can be large or small, but the bigger ones tend to have corporate sponsorship and more competition. Other activities are usually available alongside the cars -- ranging from concerts to wet T-shirt or bikini contests.