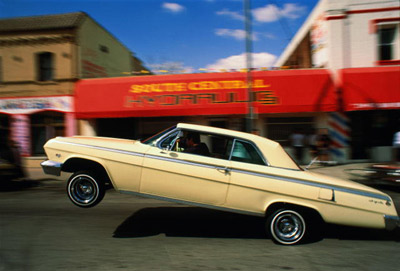 Image Gallery: Custom Cars "Lowrider drives a little slower." This 1962 Chevrolet Impala can hop and dance with the best of them, though. See more pictures of custom cars.
Robert Yager/Stone/Getty Images

On nights when the weather's nice, they come out. Shiny hunks of metal rumble and growl their way to parks, parking lots and quiet side streets. The best from Detroit's golden years are usually displayed in their meticulously preserved glory at classic car meet-ups and cruise-ins. But as modified cars grow in popularity, you're more likely to see them on the road. One of the most recognizable modifications gearheads make to their cars is to lower the suspension so that the body skims the ground. This basic modification has given rise to an entire subculture of the car hobby: the lowrider.

It's not clear when lowriders first entered car culture, but as long as people have been modifying cars, they've lowered or raised the suspension to change the car's performance or look. Modifying old cars was a popular hobby in the late 1940s and 1950s and gave birth to hot-rods and rat-rods. While many hot-rod builders would lower their car's suspension, it was only one of many common changes. Eventually, lowriders as class of modified cars emerged and gained popularity by the late 1960s and early 1970s. They remain one of the most popular types of modified cars.

For many people, lowriders are more than cars -- they're a way of life. "Lowrider" refers not only to a type of car, but also to a person or lifestyle. People who call themselves lowriders typically own and show lowrider cars and follow urban and hip-hop culture. Lowriders as a trend started out in Mexican-American and Chicano communities in Southern California. Later, the cars became popular in urban African-American communities. Today, lowriders are a part of hip-hop culture, showing up in music videos and influencing car design trends. Hip-hop influenced lowriders are the most popular ones today. They're large cars from the 1960s and '70s that feature flashy paint and sport oversized wheels and tires. Original-style lowriders still persist in the Southern California communities where they originated. These cars tend to be from the 1950s and use more subdued paint and wheels.

So what models are best suited for lowrider modification? And how do people make their cars hop and dance? Find out in the next section.