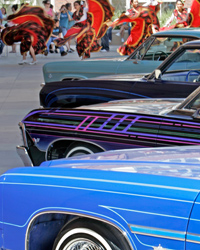 When most people think about customizing a car, they think about improving the car's performance. Cars with extra-large engines stuffed under the hood, trucks with a lifted suspension to better crawl over rocks and massive superchargers are common at most car shows. But there's a special brand of customization that doesn't have anything to do with making the car go faster. When it comes to this type of customization, it's all about making it bajito y suavecito (low and slow).

Lowriders are a type of car customization where the goal of the customization is not increased performance. Instead, lowriders try to make their cars as sleek, stylish and sexy as possible, usually by dramatically lowering the car's suspension, adding body work like fender skirts, lowering the roof line and applying a flashy coat of paint. Inside, lowriders are all about comfort, with plush seats and banging sound systems.

Lowrider style evolved out of Chicano culture in California in the 1930s. At the time, immigrants began to buy and customize older cars -- usually Chevrolets. Seeking to differentiate themselves from the dominant hot-rod culture of the era, early lowriders (who called themselves pachucos), didn't customize their cars for nights at the drag strip. Instead, they wanted cars that would look good and be comfortable as they cruised the streets, hoping to meet girls.

From that urge to impress girls has grown an enduring custom car style that's even influenced some production cars. To learn more about lowrider style, check out these 10 great lowriders.