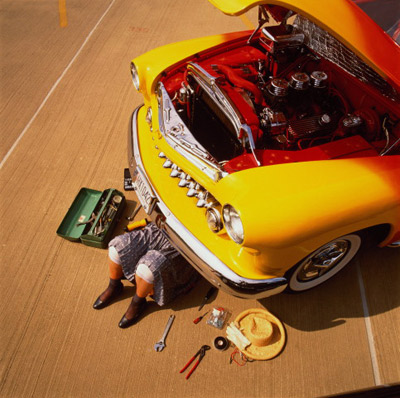 Building a lowrider like this 1953 Mercury can be quite expensive. It's best to treat such a project as a hobby rather than as an investment.
Dennis Kitchen/Stone/Getty Images

Lowrider prices vary widely and depend on the car's condition, the expertise that went into the modifications, the type of modifications and the type of car that was modified. Some lowriders cost as little as $2,000 to $3,000, while especially desirable models with top-notch technology cost as much as $20,000. It's rare, however, to find a lowrider that costs much more than that since typical lowrider modifications don't do much to increase the collectability of a car. But because collectability is dependent upon market trends, the more popular lowriders become, the more collectable (and more valuable) they become.

Building your own lowrider is a popular car hobby. Some people think it's cheaper than buying a ready-made model. Others want specific modifications. And some simply enjoy doing the work themselves. The last two reasons are the best reasons to build your own lowrider, as the investment of parts, labor and time may end up costing more than the car is actually worth. Builders can spend thousands of dollars finding a car to modify, buying the parts and performing the work, only to end up with a car that won't sell for what they spent. Building a lowrider is best for people who do it as a hobby -- not an investment.

But a lowrider is much more than just a car with a lowered suspension. What are some other changes that make a modified car look the part? We'll take a look at lowrider exteriors and interiors in the next section.

If a lowrider car sounds like too much to handle, how about a lowrider bike? Like the cars, lowrider bikes have a shortened suspension, making them ride lower to the ground. They also force the rider into a laid-back riding position that approximates the laid-back position many lowriders use when they drive. Even though the bikes are cheaper than the cars (and use less gas), a custom lowrider bike from a sought-after builder can still cost thousands of dollars.