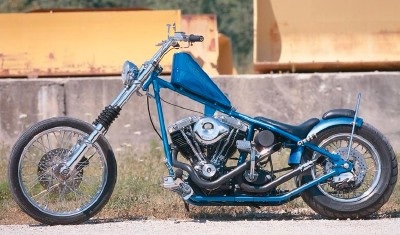 Anyone who has seen the TV programs where a chopper is built in weeks or even days might be surprised to learn that this Shovel chopper took 15 years to reach its final form.

Beginning life as a 1974 Harley-Davidson FXE, the owner began modifying the bike to meet his own personal tastes. Eventually, even the frame was replaced with a catalog item.

Once the chassis was set up, the next step was to bump the output of the Shovelhead V-twin. Displacement was increased from 74 to 98 cubic inches, and that, along with other modifications, increased output significantly. A wider 180-series rear tire was wedged into place to put the power to the street.

To give the chopper a distinctive look, Dragon's formed a custom fuel tank to match the frame's angular design. A hand-formed exhaust system was another step in what became a long creative process, but sometimes it takes a while to get things just the way you want them.

Go to the next page for more photos and details of this Harley-Davidson-powered chopper, Shovel.For more information on custom choppers and motorcycles, see: