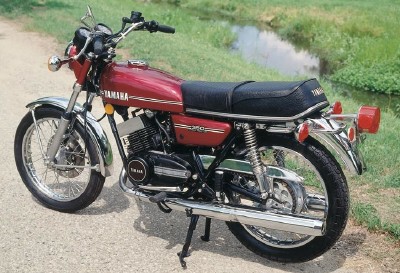 The RD350 had a broader power band than most two-strokes, making it easier to ride in traffic. See more motorcycle pictures.

The 1974 Yamaha RD350 motorcycle was a landmark bike, being light and very powerful for its size.

Originally a manufacturer of musical instruments, Nippon Gakki added a small motorcycle to its line after World War II.

It was based on the same German DKW 125-cc two-stroke single as the post- war BSA Bantam and Harley-Davidson S-125 motorcycles. And like those models, it proved successful in the postwar seller's boom. In honor of Nippon's founder, it was given the name "Yamaha."

Yamahas were reasonably successful in racing during the 1950s, and when the company bought Showa late in the decade, it added that firm's knowledge of rotary valves to its engineering portfolio.

Following were a series of larger twins up to 305 cc, all two-strokes. The largest eventually evolved into the 1974 Yamaha RD350 motorcycle.

By then, Yamaha had already branched out into four-stroke twins represented by the 650-cc XS1. Although variations of that model would continue for a good many years, the company didn't abandon two-strokes -- at least, not yet.

The 1974 Yamaha RD350 was a milestone motorcycle, with an exceptional power-to-weight ratio and, thanks to reed-valve induction, a broader power band than most two-strokes. That made it not only quick, but easy to ride in traffic.

But two-stroke street bikes in general were not long for this world, as they were being squeezed out by U.S. emission laws, and the RD series was discontinued in 1980.

Continue to the next page to see more 1974 Yamaha RD350 motorcycle pictures. 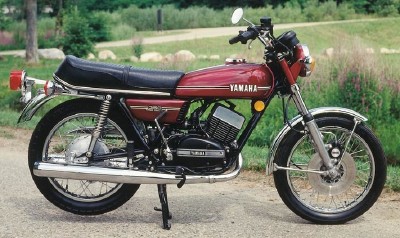 Yamaha marketed its reed-valve induction as "Torque Induction."
The powerful two-stroke twin made the lightweight RD350 a quick bike for its size, and the Torque Induction made it docile in traffic.
Redline was a healthy 8500 rpm.
The speed potential of the RD350 made the front disc brake a welcome feature.