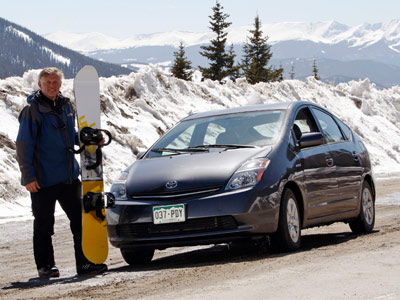 Hybrid Car Image Gallery Kim Fenske, of Copper Mountain, Colo., poses for a photo beside his 2008 Toyota Prius sedan before he sets out for a day in the snow. See more pictures of hybrid cars.
AP Photo/David Zalubowski

Even though gas prices aren't as high as they were during the summer of 2008, there continues to be a lot of interest in green driving. As you probably know, fuel-efficient vehicles still sell, and car companies are continuously working on new technologies so that drivers can do a little eco-friendly driving.

Right now, the most common type of extra fuel-efficient vehicles on the road are gas-electric hybrids. Hybrid cars use electric motors to supplement gasoline engines in order to achieve maximum fuel efficiency. But that's not the only way hybrids help you drive green.

Most hybrids are engineered from tip to tailpipe for the best fuel efficiency possible. Hybrids use aerodynamic shapes to minimize wind resistance, they use special tires to minimize rolling resistance and they even make use of specialized cabin electronics to minimize the extra load the engine has to bear.

But, with all of these specialized systems carefully calibrated to wring every possible mile out of a gallon of gas, what happens when one part of the system changes? We're not talking about part of the car malfunctioning. A hybrid car is specifically engineered to work at maximum efficiency in a certain environment -- but what if the environment changes? Can a hybrid still perform?

That's what we're here to explore. Specifically, we're going to find out if hybrids perform well in cold weather. Anyone who has had an old clunker knows how cold weather can wreak havoc on your car. Cold weather makes a car tough to start -- that is, if it starts at all. But today's hybrids are a lot different than that old car sitting in your driveway. So, let's see how hybrids work when the mercury starts to drop.

If you're into green driving and track your fuel economy closely, you probably know that cold weather can cause your car to require a little more gas. There are a lot of reasons for this. The biggest is that cold temperatures cause gasoline to thicken. That makes it difficult for the gas to combine with the intake air and provide the proper air-fuel mixture that an internal combustion engine needs. Not only is it harder to generate the correct mix, but it's also a little less powerful when the gas is cold. That means you end up using more gas to do less work.

The same factors are at play for hybrids and other fuel-efficient vehicles. While hybrids use their electric motors for slow-speed driving, their gasoline engines fire up when more power and speed are needed, and in cold weather, those engines are less efficient. What makes matters worse for hybrids is that because their engines aren't in constant use, in cold weather, it can take them longer warm up.

Think about it: Regardless of where you live, there's a good chance that you've gotten into a car on a cold morning. After a few miles of driving, even if those miles are driven slowly or in heavy traffic, the car gradually warms up. But in a hybrid, those few miles of driving may only use the gasoline engine part of the time, making it slower to warm up. That keeps the gasoline relatively cold and the engine running below maximum fuel efficiency.

But thickened gasoline and cold engines aren't the only effect cold weather has on eco-friendly driving. A lot of the time, cold weather means snow and ice -- and wet winter weather can have a negative impact on all cars' fuel economy, not just hybrids'. The negative effect comes from a couple of places. First, if an area gets a lot of snow, drivers are likely to use snow tires, which are heavier and have more rolling resistance than the typical low-rolling-resistance tires on a hybrid. That brings fuel economy down. Second, snow and snow-clearing chemicals can build up on the vehicle's exterior surfaces, blocking the grille and making it tougher for air to get to the engine. If the engine can't breathe well, fuel economy suffers. Lastly, if drivers don't clear all the snow and ice off their cars, it adds extra weight. Extra weight means fewer miles per gallon -- not to mention some pretty severe safety issues, too.

One thing you likely don't have to worry about is your hybrid's battery pack freezing. While standard car batteries can (and do) freeze in extreme cold, hybrid car batteries are much less prone to freezing. In fact, most manufacturers rate their hybrid batteries to perform in weather as cold as -22 degrees Fahrenheit (-30 Celsius) [source: HybridCars.com]. 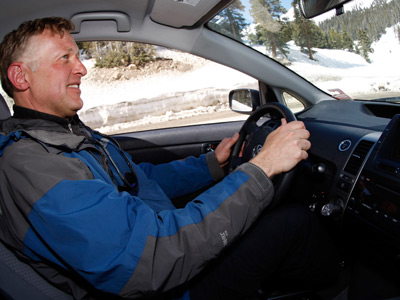 Hybrid cars perform well in most climates, but how do they fare when the temperature dips below freezing?
AP Photo/David Zalubowski

Now that you've seen how cold weather can negatively impact a hybrid's fuel economy, let's explore how hybrids actually perform on snow an ice. It's a legitimate concern when you're still trying to do a little eco-friendly driving during the cold winter months. Many consumers in colder climates buy large trucks and SUVs specifically because those vehicles handle snow and ice well.

Fuel-efficient vehicles, the thinking goes, are at a significant disadvantage when it comes to snow and ice, often because of the very designs that make them perfect for green driving. For instance, a hybrid's lower stance gives it a lower ground clearance and improved aerodynamics, but that also makes it tougher to clear deep snow. As another example, low-rolling-resistance tires are great for fuel efficiency, but they don't offer much grip even on dry pavement. And because hybrids tend to be light, they also slip and slide a little more easily.

But really, how a hybrid performs in snow and ice truly depends on the type of hybrid you own. Hybrid cars now come in all shapes and sizes -- there are even hybrid trucks and SUVs equipped with all-wheel-drive for extra grip in the snow.

Even small hybrid sedans have the potential to do well on snow and ice. Those small hybrids tend to be front-wheel-drive. While not as surefooted on snow as all-wheel drive, front-wheel-drive cars have an advantage over rear-wheel-drive cars because the heaviest part of the car -- the engine -- is on top of the drive wheels, which pushes them down through the snow and gives them better grip. Also, during snowy seasons, drivers can opt to trade a little fuel economy for more traction by putting snow tires on their hybrid. And finally, most new hybrids come with traction control, which monitors, among other things, wheel spin to help the driver maintain control of the car. Basically, traction control helps a driver avoid skids and slips.

So, is a Toyota Prius as good in the snow as a Land Rover? Probably not. But, a GMC Yukon Hybrid will do just as well as a conventional Yukon. And with some careful driving -- and maybe a new set of snow tires -- a Prius will likely get its driver through the snow safely, and use a lot less gas than the Land Rover while doing it, too. And when summer comes around and gas prices spike, the Prius driver will have been happy to put up with a few weeks of careful snow driving to enjoy the benefit of money saved at the fuel pump. 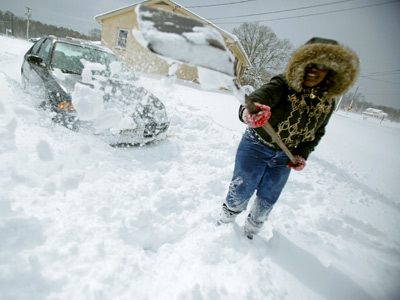 When cold weather comes calling, there are some trade-offs that hybrid drivers have to make. But when you really think about it, they're the same trade-offs that all car drivers have to make. Sure, cold weather causes hybrids to have a drop in fuel efficiency. But keep in mind that all cars have that same lowered level of efficiency to deal with. Because hybrids are so efficient to begin with, they're still a better green driving option -- even when it's cold out. However, there do happen to be a few steps you can take to winterize your hybrid to make sure that you can continue eco-friendly driving year round.

First, since you know that cold weather is going to make it tough for the engine of every vehicle to warm up -- fuel-efficient vehicles included -- you're going to need to look for ways to gain mileage elsewhere. One easy thing that you can do is keep you hybrid's interior cleaned out -- carrying extra weight in your car's trunk or keeping your ski-rack on the roof year-round negatively impacts a car's efficiency because it takes more power to carry the extra weight. Keep wind resistance in mind too -- that's where taking the ski rack off your vehicle's roof comes in -- but it also means cleaning all of the snow and ice off your car before you head out.

Check the air pressure in your tires as well. Cold causes air molecules to contract, which means that tires can suddenly become under-inflated. Under-inflated tires increase rolling resistance, which makes it harder for the car to move and it takes a toll on your fuel economy, too. If you live in a snow-prone region and the streets aren't always clear, you may want to bite the bullet and get snow tires for your hybrid. Sure, you'll lose some fuel efficiency, but you'll gain stability. Plus, you may even be able to make up some of the loss in fuel economy by altering your driving style to be as efficient as possible.

Finally, as with any car or truck, use common sense when driving in snow and ice. Learn how to drive out of a skid or a fish tail, and keep a small winter emergency kit in your car. A small bag of sand or kitty litter and a shovel can often help get your car unstuck, and while the extra weight won't help your fuel economy much, if you get stranded, you'll be awfully glad you had it. Also, keep a close eye on all of your car's fluid levels -- especially anti-freeze and windshield wiper fluid -- and top them off if they start to get low.