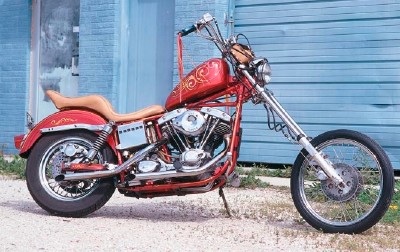 This Cherry Chopper began as a See more chopper pictures.

Like many early customs, the Cherry Chopper started life as a Harley-Davidson; in this case, a 1978 FXE that was purchased new by the current owner. This model combined the frame and engine of the big FL touring bikes with the lighter forks and hooded headlight of the XL Sportster.

Extended forks were a chopper staple back then, and these have been stretched ten inches and mounted at a 40-degree rake. Without a stretched downtube, the longer forks lift the whole chassis off the ground, placing the front higher than the back -- another trait common to early choppers. Other elements that defined the breed are also present: midrise handlebars, stepped saddle, and straight pipes.

Whether new or old, what often sets one chopper apart from another is the paint scheme, and the Cherry Chopper is no exception. Its deep Cherry Red basecoat was treated to swirling gold graphics that dressed the tank, rear fender, and frame. While the design is typical of the 1970s, the quality and detailing benefit from modern techniques-giving this bike a look few of its ancestors could match.

Go to the next page for more photos and details of this Harley-Davidson-powered chopper, the Cherry.For more information on custom choppers and motorcycles, see: 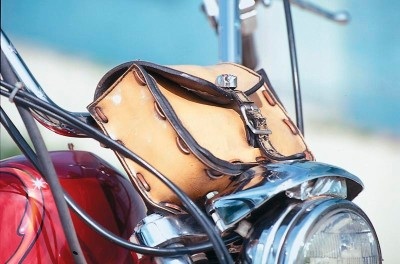 The Cherry's custom touches include a small satchel between the midrise handlebars.

The Cherry Chopper is a custom Harley-Davidson motorcycle customized by Terry Douglas. Below are more pictures and details of this powerful chopper.

Stretched forks, midrise handlebars, stepped seat, and straight pipes make the Cherry representative of the typical chopper of the 1970s.
What sets the Cherry chopper apart is the paint scheme, which is more elaborate than most choppers of the period.