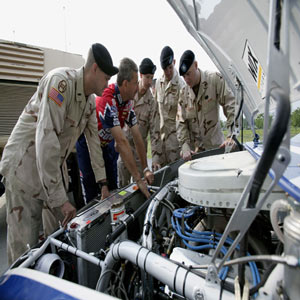 ­If you really want an idea of how much skill it takes to build a NASCAR engine, simply check out the MAHLE Engine Builder Showdown (formerly the MAHLE Clevite Engine Builder Showdown). In this televised contest, two-person teams of professional builders face off to see who can put together a running, 357-cubic inch, Ford Sprint Cup engine in the fastest time.

In 2008, the event took place at the NASCAR Technical Institute in Mooresville, N.C., one of the places that specialize in training technicians for the unique expertise required in NASCAR. The contest was broadcast on the SPEED Channel show "Two Guys Garage." The winners, Dennis Borem and Darrel Hoffman of Pro Motor Engines, built their engine in an astounding 15 minutes and 59 seconds, beating their own record from the previous year by nearly thirty seconds [source: MAHLE Clevite].

In addition to understanding the mechanical engineering principles of how engines work, you'll need to learn advanced diagnostic techniques. This may entail hooking up the engine to computerized measuring tools designed to maximize performance. One of the best-known engine diagnostic tools is an engine dynamometer, or engine dyno. This tool gives computerized screen readouts of torque, revolutions per minute (rpm) and horsepower, as well as other critical engine information.

Many team and independent engine-building programs have people with doctoral degrees on staff. They might study such specialized topics as fuel atomization and the properties of combustion "flame kernels," among other things. Some high-end engine builders come from careers working with major automakers. Of course, they all share the expertise necessary to thrive in the fast-paced world of NASCAR.

To find out more about NASCAR engines and other NASCAR-related topics, take a look at the links that follow.