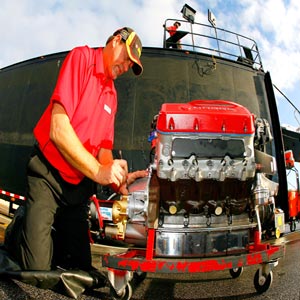 ­Speeds can get pretty high in NASCAR. In 1987, driver Bill Elliott turned in an astounding qualifying lap speed of 212 mph at Talladega Superspeedway. During the actual race, Bobby Allison's vehicle suffered a sliced tire and went airborne into a retaining fence, narrowly averting catastrophic injury to the driver and hundreds of fans behind the fence. As a result, NASCAR brass decided to slow down the cars for safety's sake by introducing restrictor plates.

At Talladega and other fast NASCAR tracks, teams must use carburetor restrictor plates to decrease their engine's output. A restrictor plate is simply an aluminum plate with four holes in it to restrict the amount of air and fuel that can go into the engine.

The fuel and air mixture goes through the four small holes before it can enter the four larger holes of the carburetor and into the engine. Think of the overall effect as the difference between drinking a soft drink from a normal straw versus drinking it from a coffee stir straw.

NASCAR has a controlled process to select restrictor plates to prevent cheating: A team member gets to reach over a barrier to select a plate at random. An official raises the plate aloft for spectators, then inserts the plate on a pole to measure the hole diameter -- the holes are each about the size of a quarter, give or take a few fractions of an inch. After that, the official installs the plate on the team's engine before securing it with a NASCAR seal to prevent tampering [Source: ­Martin].

A restrictor plate can reduce horsepower by as much as half, from about 800 hp normally, down to 400 hp with the plate installed [source: NASCAR.com]. Incidentally, many drivers have complained that the bunched-up style of competition known as "restrictor plate racing" actually causes more accidents. When one driver loses control, the cars' proximity can spark a chain reaction of crashes that drivers and fans have come to call "The Big One" [source: Busch].

­When it comes to building stronger and faster engines, NASCAR is among the major leagues. Like any high-level sport, becoming one of the best takes talent, hard work and experience.