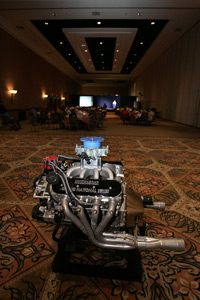 This engine is so pretty, NASCAR had to show it off.
Robert Laberge/Getty Images

­You may have heard racing people speak of "blowing an engine." That's just a bit of racing jargon referring to a critical component damaged enough to make an engine useless for the rest of a race. Blowing an engine can be something repairable and replaceable, such as breaking a connecting rod or damaging a piston. It can also be something catastrophic like cracking the engine block or melting part of the block. That begs the question: Just how do you break something made out of cast iron, reinforced steel and exotic metal alloys?

The answer is actually quite simple: Subject the engine to lots of heat and pressure. During the course of a race, which may last hundreds of miles, engines are subjected to multiple cycles of extreme heat and pressure. Certain racetracks, like the tri-oval-shaped Pocono Raceway in Long Pond, Pa., concern teams due to their layout and propensity for engine failure. The Pocono track requires a great deal of severe decelerating, then accelerating in the turns. This rapid transition of performance requirements produces engine fatigue [source: Martin].­

The temperature inside a NASCAR V-8 engine can reach 2000 degrees Fahrenheit and the pressure can reach 1500 psi, or more than 100 times the normal air pressure we feel around us every day. NASCAR engine parts are heavily reinforced to protect against these extreme conditions. In other words, they're bigger, stronger and thicker than their counterparts would be on a less powerful car. In fact, practically any moving engine part you can think of, from crankshaft to valves to valve springs to pistons, feature some reinforcement.

Some parts exposed to the worst of an engine's extreme heat use special metals to keep them from melting and fusing with another part of the engine. This is why valves are made out of titanium, for example. Titanium has the highest strength-to-weight ratio of any metal, is highly resistant to heat and corrosion and is considerably more expensive than more conventional metals and alloys. The engine blocks themselves are made out of cast graphite iron. Because of graphite's molecular structure, adding it to iron makes the resulting alloy stronger and more resistant to heat [source: Leslie-Pelecky].

While some teams build and maintain their engines in-house, others defray expenses by leasing their engines from someone else. One of the most well-known providers of leased engines is Hendrick Motorsports, which builds more than 700 engines per year for Hendrick race teams and outside clients.

Over the years, NASCAR engines have been highly refined to squeeze the most performance out of what many consider to be old-school engine technology. Nonetheless, the most recent cutting-edge advances in NASCAR have come in non-engine areas, such as aerodynamics and safety.

­With NASCAR teams constantly pushing the boundaries of racing know-how, cars have progressively become faster and more powerful. In fact, they got so fast that NASCAR officials worried for the safety of drivers and fans.