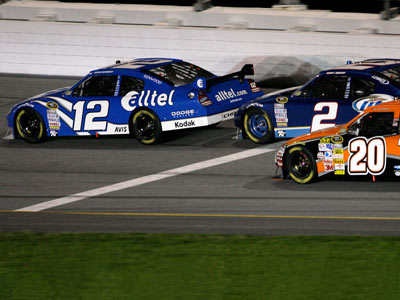 NASCAR driver Ryan Newman (12) passes Tony Stewart (20) on the backstretch as he gets drafting help from Kurt Busch (2) on the final lap of the 50th running of the Daytona 500 at Daytona International Speedway. Newman won the race.
AP Photo/Mark Young

­While the cars, technology and strategy are constantly changing, drafting will always play a role in racing. Below are a few examples of NASCAR wins where drafting attack and defense were critical to success.

During the Firecracker 400 at Daytona in 1974, David Pearson was in a two-car draft with Richard "The King" Petty. Pearson was reportedly worried about a slingshot maneuver from Petty and at the last minute allowed Petty to surge ahead. Pearson used the greater horsepower in his car to make up the distance, then drafted Petty and used a slingshot maneuver to get around him to take the win.

At the Daytona 500 in 1999, Jeff Gordon fended off a nose-to-tail challenge from racing legend Dale Earnhardt. Earnhardt attempted to "fan" Gordon's tail -- essentially disrupt the downforce off Gordon's car and unstick his wheels by sweeping the nose of his car into Gordon's slipstream. The tactic failed and Gordon went on for the victory.

At the 50th running of the Daytona 500 in 2008, driver Ryan Newman received the "push from heaven" and drafting aid from teammate Kurt Busch (both of Penske Racing) to pass leader Tony Stewart on the backstretch and take the win.

­If you enjoyed this article, then you may want to take a look at the next page, too. There, you'll find several articles focused on NASCAR and NASCAR-related topics. It's definitely worth a look.