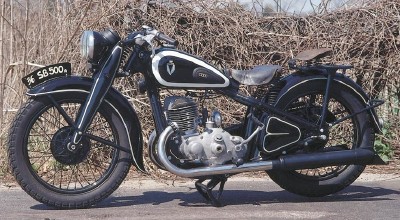 The 1936 DKW SB 500 A had a three-speed transmission with a hand shifter and foot-operated clutch. See more motorcycle pictures.

The 1936 DKW SB 500 A motorcycle differed from the DKW SB 500 in that it had a stronger frame fitted with a larger fuel tank and twin headlights. It also had electric start, a rare feature for the 1930s; by contrast, Harley-Davidson didn't offer an electric starter until 1965.

German-based DKW began building motorcycles in 1919, starting with a one- horsepower engine in a bicycle frame. By the 1920s, the company had grown to become one of the largest producers of motorcycles in the world.

Not only did DKW build its own machines, but it also supplied two-stroke engines to other manufacturers, and even built automobiles from 1929 until the late 1960s.

Before the outbreak of World War II, DKW had amassed an impressive racing record, including a win at the Isle of Man TT event in 1938. During the war, DKWs saw extensive use on battlefields throughout Europe.

The 494-cc (30-cubic-inch) twin in the 1936 DKW SB 500 A resulted from combining two separate 247-cc cylinders on a single block. Fed by a Bing carburetor, the two-stroke engine produced 15 horsepower.

As did many bikes of the period, the DKW had a three-speed transmission with a hand shifter and foot-operated clutch. Also common for the era were the girder front fork and rigid rear frame.

See the next page for a variety of pictures of the 1936 DKW SB 500 A motorcycle. 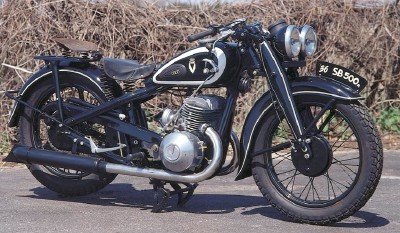 The 1936 DKW SB 500 A featured a Bing carburetor and a two-stroke engine that could produce 15 horsepower.

"A" models had a larger fuel tank than regular SB 500s.
A girder fork was common for the era. Dual lamps weren't.