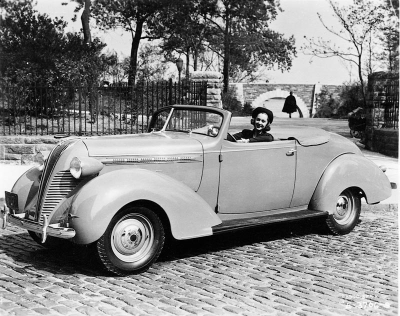 Though Essex Terraplanes sold for as little as $425, their successors were pitched somewhat upmarket in the $565-$880 range. The 1934 Terraplane also offered more variety, with Special and midline Challenger on a 112-inch wheelbase and Major models on a 116-inch chassis. Majors were mustered out for '35, when Challenger was renamed DeLuxe. The 1936 line offered DeLuxes and uplevel Customs on a new 115-inch platform that was stretched two inches for the 1937 DeLuxe and Super models.

Unlike many companion makes, the separate-make Terra­planes followed period design trends but avoided excesses, though the 1936-37 "fencer's mask" grille was debatable. Body styles were the usual sort. Roadsters and phaetons were never listed, but brougham and coach sedans in regular and trunkback "touring" form were always available, as were fixed-roof and convertible coupes. A smart victoria was offered for 1934 only. A DeLuxe wood-bodied station wagon was exclusive to '36, while in '37, a small number of Terraplane chassis were built for commercial applications.

All these cars had fine performance characteristics. A British road test of a 1936 Terraplane sedan showed 0-60 mph in 26.6 seconds and a top speed of 82 mph, both highly creditable for a period car weighing some 2800 pounds. Moreover, as the report observed, "The six-cylinder engine…has that suppleness and quietness in it's running that are characteristic of American design…Even at 70 there is no special fuss…[The Terraplane] can thus be a decidedly swift car for journeying over long distances, and is an easy one to handle, too…[It] gives, and does, much for its price."

With that, plus the demise of most other junior editions, the 1938 Terraplanes received Hudson badges and expanded to include standard, DeLuxe, and Super models with eight extra horsepower. But with that year's new "112" line, Terraplanes were no longer Hudson's smallest or most-affordable cars. Sales proved disappointing, so the name was dropped, though Terraplane continued to live on in spirit as the 1939 Series 91 Pacemaker and Series 92 Six.