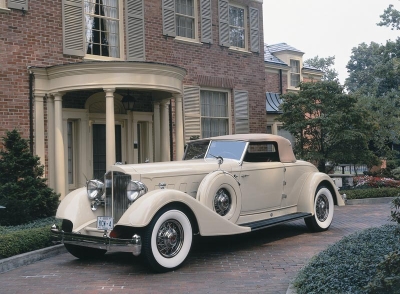 Packard would begin to phase out customized bodies, such as this 1934 Twelve Dietrich convertible coupe.

But the big news occurred at the top and bottom of the line. Leading the fleet was a new Twin Six, which was renamed Twelve after this one year. It bore no relationship to the 1916-23 original, with a new 445.5-cid V-12 that had actually been planned for an aborted front-drive chassis. Though a fairly low numerical axle ratio was available, most of these cars got gearsets of 4.41:1 or higher.

The result was smooth, relatively shift-free motoring rather than high performance. The factory claimed a sustained 100 mph was well within the new V-12's capabilities, but that was under test conditions; the 160-bhp engine usually ran out of breath at about 90 mph in stock tune. At 60 or 70 mph, though, it was whisper quiet and highly refined.

The 1932-34 V-12s shared the same two wheelbases and most bodies with the upper Eight series, which was again called DeLuxe for '32, then Super. In all cases, the longer chassis was reserved for Individual Customs and a standard seven-passenger sedan and limousine.

Despite their prestige as the ultimate Packards, the V-12s arrived at only $100-$200 above counterpart DeLuxes with factory bodywork, but the gap grew as time passed, especially between the various custom-body models.

In 1935, when "senior" production was consolidated to make room for the new high-volume One Twenty, the Twelve gained a stroked 473-cid engine with 175 bhp, and shifted to 139- and 144-inch wheelbases. Super Eights offered similar body styles on those same chassis, as well as a trim 132-inch platform. Custom bodies thinned quickly as coachbuilders either went bankrupt or were bought out, but a few were always listed through 1942.

As an independent, Packard couldn't face the Depression with solid financial backing from a big parent, so it tried medium-priced cars well before Cadillac or Lincoln. Its first was the 1932 Light Eight, appearing two years ahead of a smaller, cheaper LaSalle and four years ahead of Lincoln's Zephyr.

A quality product built with the same meticulous care as other Packards, the Light Eight was true to its name. It rode a lighter, trimmer 127.8-inch chassis mounting the standard Eight's 320 engine, rated that year at 110 bhp. The Light Eight was thus faster than its bigger sisters. Body styles comprised four-door sedan, five-passenger coupe-sedan, and rumble-seat roadster and coupe.

But the Light Eight looked chunkier than other '32 Packards because it was shorter overall, and its attractively affordable pricing -- around $2000 -- was more liability than asset. A Light Eight cost almost as much to build as a corresponding standard Eight yet sold for $500-$850 less, so Packard was lucky to break even on any Light Eight sold. The line was accordingly dropped after this one year.

Packard lost $7 million in 1932, much of it on the Light Eight, so company president Alvan Macauley began searching the ranks of GM executives for someone wise in the ways of volume production who could help the firm develop a profitable middle-priced car. Ironically, the firm netted $500,000 with 1933 sales that amounted to 38 percent of the high-priced market -- well above Cadillac's share. Trouble was, the high-priced market was virtually gone.

But Macauley's search was about to pay big dividends. Soon coming aboard were Max Gilman, "that hardboiled guy in New York" (he'd started as a Brooklyn truck salesman in 1919), and George T. Christopher, a production whiz enticed out of retirement from GM. (Gilman replaced Macauley as president in 1938, when the latter became chairman; Christopher replaced Gilman in 1942.) While Gilman astutely set the publicity stage, Christopher modernized Packard's plant end-to-end for much higher volume. The fruit of their combined labors was unveiled on January 6, 1935, as the One Twenty.