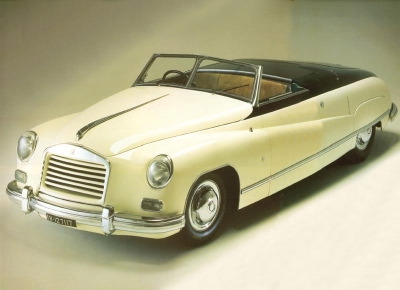 The 1947-1948 Isotta Fraschini 8C Monterosa provided a last glimpse at glory from what had been one of the world's top automakers before the market for its luxurious products dried up in the early 1930s. Then, in the wake of World War II, came dreams of a revival.

The scars of world war were still fresh across Europe in the lean year of 1947, both on the landscape and throughout societies seeking to reorganize themselves after horrible years of devastation. That's why it seemed astonishing to the car world that former Italian luxury maker Isotta Fraschini had sensational plans to revive its lost glory.

The vehicle for this attempted renaissance would be the Tipo 8C Monterosa, named for the Via Monterosa, the Milan street upon which Isotta Fraschini's shops had stood during its greatest days. However, by 1947, Isotta Fraschini was a name nearly forgotten after 13 years of inactivity as a luxury carmaker (though the manufacture of trucks and engines for boats and aircraft sustained it through the 1930s and 1940s). The development of the revolutionary new luxury car in the works was inseparably linked with the name of an extraordinary engineer: Fabio Rapi.

Given that it has been more than 50 years since Isotta Fraschini last made a car, it may not be possible for the modern automobile enthusiast to fully appreciate the significance of the 8C Monterosa project without some background. Having made their initial foray into the automobile business as importers of French cars, Cesare Isotta and Vincenzo Fraschini next formed a company that would lead, in 1902, to the production of the first car to bear their names. In 1905, engineer Giustino Cattaneo joined the company as technical director. It was he who was to lead Isotta Fraschini over the next 30 years to become a perfect example of world-class car manufacturing.

The firm produced numerous highly regarded models prior to World War I, including some internationally famed racers. (Among the advances attributed to Isotta Fraschini in this period was the first use of four-wheel brakes.) During the Great War, Italian naval and air forces were well served by Isotta Fraschini engines.

The first completely new design announced after the war, the Tipo 8 of 1919, launched a new single-model policy. The ingeniously constructed, near-perfectly built 6.0-liter ohv inline eight-cylinder engine of the Tipo 8 -- regarded as the world's first series-production straight eight -- was held in the same esteem as the powerplants in Rolls-Royces and Hispano-Suizas.

Reliability, technical refinements, and the sedate elegance of coachbuilt bodies made Isotta Fraschini well known far beyond Italy's borders. Above all, there were always solvent clients in the United States. By 1924, the year in which a more powerful Tipo 8A was first shown, sales branches had been established in London, Brussels, New York, Buenos Aires, and other cities with their fair share of extremely well-heeled motorists. Emperors and kings, movie stars, tycoons, boxing champions -- even Pope Pius XI -- swore by this automobile.