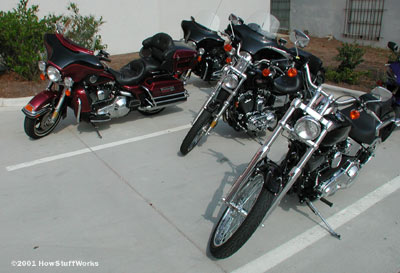 ­Motorcycles come in many different styles, each offering design and performance characteristics to accommodate specific riding conditions. Let's take a look at the common categories of motorcycles.

Street motorcycles come with all of the necessary equipment to be street-ready. They have lights, mirrors, a horn and a muffler. Their tires have a tread pattern that provides good traction on both wet and dry roads. Street motorcycles generally come in two forms -- touring motorcycles and cruisers. Touring motorcycles are specially designed for long-distance travel. Their most distinctive features are fairings, aerodynamic wind guards that wrap around the headlight to enhance styling and reduce drag. Touring bikes also come with other long-distance amenities, such as saddlebags and a comfortable passenger seat. Cruisers, which typically have no fairings, offer a more laid-back look. They are built with swept-back handlebars, low seats, and casual riding positions with forward-set footpegs.

Naked bikes offer the performance of sportbikes without the aesthetics. In most cases, they are stripped of any unnecessary bodywork. Because they're often the product of bike customizers who want a "road warrior" appearance, naked bikes are also called streetfighters, especially in Europe.

Also known as standards, traditionals look and handle like an archetypical model known as the Universal Japanese Motorcycle (UJM), built primarily in the 1970s. The UJM was an all-purpose, do-everything bike, and today's standards offer the same versatility and straightforward design.

Off-road motorcycles include both motocross bikes and dirt bikes -- machines designed to handle jumps, bumps and other obstacles found on closed racing courses or woodland trails. Off-road motorcycles have narrower, lighter frames, increased ground clearance and advanced suspension systems. They also have a kick-starter to reduce weight and tires with a knobby tread pattern for increased traction. Because off-road bikes usually don't come standard with lights, mirrors, a horn or a muffler, they aren't street-legal.

Dual-purpose bikes, also known as dual-sports, are street-legal motorcycles that offer some off-road capabilities. Like dirt bikes, dual-purpose machines are lightweight and durable. Like standards, they offer great versatility for newcomers and long-time riders alike. The dual-purpose motorcycle falls somewhere in between a dirt bike and a street motorcycle. For example, dual-purpose bikes feature specialized tires that work on both dirt and pavement.

Next, we'll explore the history of motorcycles.

If a two-wheeled vehicle powered by steam propulsion is a true motorcycle, then the invention must be traced back to an American inventor by the name of Sylvester Howard Roper. Roper's steam-cycle hit the streets in 1869, well before the invention of the safety bicycle. The machine was powered by a charcoal-fired two-cylinder engine, with connecting rods attached to a crank on the rear wheel. However, the Roper motorcycle still placed the rider over a large front wheel.