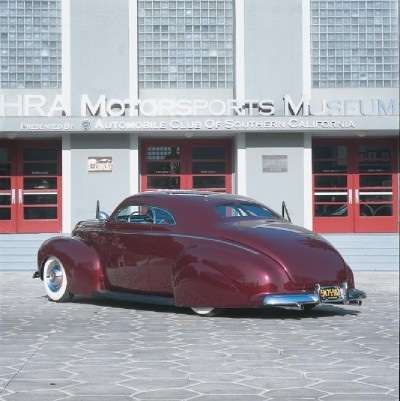 The Matranga Mercury custom car was one of the many innovative and inspiring masterworks by Sam and George Barris. See more custom car pictures.

The Matranga Mercury custom car, created from Nick Matranga's 1940 Mercury, was one of Sam and George Barris's first masterpieces, an innovative and influential car that still inspires customizers today. Sadly, it only existed in its finished form for about a year.

The car was started at Barris's Compton Avenue shop in 1949, but was in the works for over a year, enduring a couple of shop relocations as Sam carefully planned the major modifications and worked on the details.

The standout feature of the Matranga Mercury is its beautiful top chop, measuring five inches in front and seven inches in back. Sam had previously chopped the tops of Johnny Zaro's and Al Andril's 1940 Mercurys, so he had the operation down to a science by the time he did Matranga's car.

To avoid a "mail-slot" appearance at the front, the top of the windshield opening was extended into the cut-down roofline so it would match the height of the side windows.

At the time, hardtop rooflines were the latest styling innovation from Detroit. General Motors' Buick, Cadillac, and Oldsmobile divisions introduced pillarless hardtop body styles in 1949 that were well-received by the public.

The Barrises and Matranga put their own spin on hardtop styling by cutting out the center door posts of the Mercury and replacing them with smoothly hand-curved 5/8-inch channel stock.

The custom side-window trim complemented the graceful arc of the chopped top and completely changed the character of the car. This trick would be copied numerous times on other customs throughout the years.

At Matranga's insistence, the Mercury's handsome front end sheetmetal was left unmodified save for dechroming. Both the front and rear bumpers came from a 1946 Ford. The rear bumper guards were modified to house taillights formed from transparent red Lucite.

All four fenders were molded to the body, as was a 1946 Ford rear splash pan. Teardrop fender skirts from a 1941 Buick were modified to fit. A deep maroon lacquer paint job finished off the exterior.

The interior was every bit as dazzling. Glen Houser's Carson Top Shop did the upholstery in white and deep red naugahyde with black carpeting. The dashboard was fully chromed, and Nick and friend Jesse Lopez formed dash inserts from red plexiglass.The steering wheel came from a 1950 Mercury.

With a chromed dashboard and naugahyde upholstery, the Matranga Mercury's interior was just as impressive as its exterior.

The finished car racked up plenty of show trophies and served as rolling advertisement for Barris Kustom's abilities. Nick enjoyed cruising in his new custom and particularly appreciated its uncanny ability to attract girls, but soon military duty called and Nick shipped off to Korea.

Unsure of his future, Matranga sent word back to the States for Barris to sell the car. The new owner was allegedly street racing it on a rainy night in early 1952, lost control over some railroad tracks, and hit a telephone pole. The owner walked away, but the Matranga Mercury was totaled.

Given its outstanding design and short lifespan, it stands to reason that the Matranga Mercury would be copied. Plenty of beautiful Matranga-inspired Mercurys have been built over the years, but most agree that the most accurate clone was created by the late Duncan Emmons.

Though the original Matranga Mercury was totaled, Duncan Emmons was able to create this beautiful and quite accurate clone.

That car is shown here in front of the NHRA Motorsports Museum. Duncan had the expert help of Bill Hines, Joe Reath, Eddie Martinez, Red Twit, Richard Graves, and his son Duncan Jr., in making this excellent re-creation of custom history a reality.