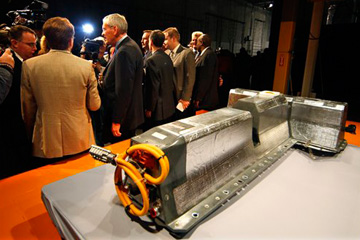 General Motors Chairman and CEO Ed Whitacre addresses the media next to the first lithium-ion battery off the assembly line for the Chevrolet Volt at the Brownstown Battery Pack Assembly in Brownstown Township, Mich., on Jan. 7, 2010.
AP Photo/Carlos Osorio

The most obvious difference between Li-ion and NiMH batteries is the material used to store power. Lithium-ion batteries are made of carbon and highly reactive lithium, which can store a lot of energy. Nickel metal hydride batteries use hydrogen to store energy, with nickel and another metal (such as titanium) keeping a lid on the hydrogen ions.

With these different structures there are, of course, several practical differences, too:

Cost: Nickel metal hydride batteries are, right now, the less-expensive technology. As production of lithium-ion cells ramps up, though, economies of scale come into play and the cost of Li-ion cells should drop. When more vehicles require more batteries, each individual battery becomes less expensive to manufacture.

Weight: NiMH batteries are larger and heavier than Li-ion batteries. Weight matters in hybrid cars, since the battery power will have to overcome the vehicle's inertia (without any help from the gasoline engine) for maximum mileage. Lighter battery packs with higher energy density make it easier to get the car going.

Power: Li-ion and NiMH batteries can actually hold a similar amount of power, but the lithium-ion cells can be charged and discharged more rapidly. Li-ion also doesn't have as much of a "memory effect," which occurs when a battery is recharged before it is fully empty. This can diminish a battery's capacity. Lithium-ion batteries are less affected by memory effect than NiMH batteries are [source: Hitachi].

Durability: While both types of batteries are durable and both have been in use for years in various applications, this is the one area where NiMH has an advantage. Some Li-ion batteries don't last as long in extreme temperatures, particularly in very hot climates. But manufacturers are working to improve the chemistry to make the Li-ion batteries last as long as the vehicles they power.

For more information about hybrid cars, batteries and other related topics, follow the links below.