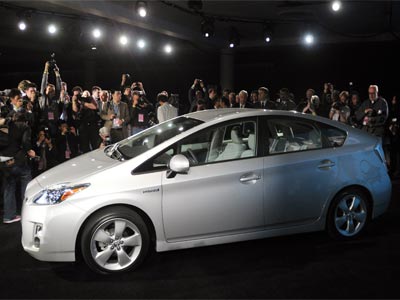 One thing some drivers like about fuel-efficient vehicles like hybrid cars is that they attempt to save as much energy as possible while the car is running. When you're stopped at a stoplight, for instance, many hybrid systems will switch off the gasoline engine completely; as the car starts once again and begins to moves forward, it uses only the electric motor, which creates little or no emissions and saves fuel until the driver reaches higher speeds.

But what if hybrid cars could save energy and promote eco-friendly driving even while the car is turned off?

Of course, some hybrid cars do this already. Plug-in hybrids, when they're parked, can charge their batteries using common electrical outlets to increase the vehicle's range. This buys the driver a little more time before the gasoline-powered engine kicks in and improves overall fuel efficiency. But charging a plug-in hybrid still involves consuming energy from the electrical grid, which, in most cases, generates power by burning coal and other carbon-based fuels that pollute the environment and contribute to global warming.

But some automakers are thinking about getting energy from a source that's located far, far away from the Earth -- the sun. Solar panels that gather energy from the sun's light have been around for many years at this point. In fact, some people even install solar power in their homes as a way to remove themselves from the power grid. But solar panels on cars haven't always been practical, mostly because of how expensive the technology is. Some carmakers, however, including Toyota and Audi, are introducing solar panels onto their hybrid models.

And as people worry about the price of gas and the impact fossil fuels have on the environment, solar panels might seem like a novel solution to increase fuel economy and make green driving easier for commuters. But how can a hybrid car make good use of solar panels? And to what extent do they power a hybrid car? Can they help power a hybrid's electric motor, or would solar panels assist other systems throughout the vehicle? How much would adding solar panels to your hybrid car cost, and would it really be worth it? Keep reading to find out. 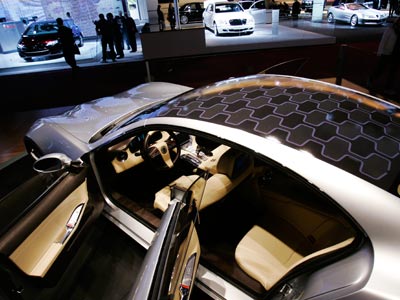 It's too difficult and expensive for solar panels to power the motors in hybrid cars, so they typically assist smaller systems like the air-conditioning unit.
AP Photo/Kiichiro Sato

There are several car companies that plan to install solar panels in their newer hybrid vehicles. Some third generation models of the Toyota Prius and the Karma, a plug-in hybrid made by Fisker Automotive, will get solar power. Even the Audi A8, a conventional car powered by a gasoline engine, uses solar panels. The big question for most of these manufacturers is: how much extra power will a solar roof panel actually provide? Can they boost the electric range for fuel-efficient vehicles like hybrids and make eco-friendly driving even friendlier and sunnier?

The answer, for the most part, is no. In the case of the 2010 Toyota Prius, an unidentified source from Toyota noted that the company's use of a solar panel in the hybrid car was more of a "symbolic gesture" than a useful source of propulsion, explaining that it's very difficult to generate enough power to move a vehicle with energy from the sun's light [source: Reuters.com]. So, solar panels generally don't have any impact on a hybrid car's fuel efficiency. Solar panels are also made out of silicon, which for the moment is too expensive for automakers to use as a viable source. In fact, a few car companies have tried in the past to install solar panels, with little or no luck. Mazda, for instance, attempted to market solar panels on two of its models sold outside of the U.S., the Eunos 800 and the Sentia, in 1992, but the system proved to be too costly and unpopular with drivers.

So what will solar panels do on top of hybrid cars if they're not powering the electric motor? The panels, built by the Kyocera Corporation, will power at least part of the Toyota Prius' air-conditioning unit. The solar panel will be available as an option on the Prius, so customers will pay extra for this feature. Smaller, less power-hungry systems seem to work better with solar power, a fact highlighted by the Audi A8, a conventional gasoline-powered car that employs solar panels for powering its air-conditioning system.

For lots more information on solar power, hybrid cars and green driving, follow the links on the next page.

How Alternative Fuel Pricing Works
Can any car be converted into a grease car?
10 Top Selling Hybrid Cars