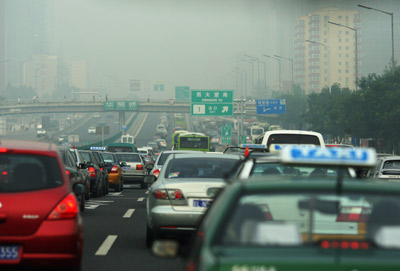 A car can be a wonderful thing. It can take you where you want, when you want -- even when those places aren't served by public transportation. In fact, much of modern life would be impossible without cars. They help us get to our jobs, schools, grocery stores or even just to the local shopping mall. Unfortunately, as wonderful as cars are, they also have some serious drawbacks. Two of these drawbacks are that they often cost a lot of money to maintain and they pollute the atmosphere with noxious gases. Air pollution has become a serious problem in many urban areas, and with gasoline prices at record highs, the internal combustion engine may soon be a luxury that society simply can't afford.

Few people would advocate giving up cars altogether, but is there a way we can have the power and convenience of an automobile without the pollution and expense caused by burning gasoline? Fortunately, there is. Many people think that the cars of the not-so-distant future will be powered not by gasoline, but by electricity. In fact, these electric cars -- also known as EVs or electric vehicles -- aren't futuristic at all. Electric vehicles have been around since the first half of the 19th century; however, even now in the 21st century, internal combustion engines still rule. But why haven't electric cars caught on?

The heart of an electric car is its battery. Unlike the batteries in
most cars, which primarily serve to start the engine and run accessories like the radio or air conditioner, the battery in an electric car runs everything. Most importantly, it runs the electric motor -- or, more precisely, it runs a controller which in turn runs the electric motor -- so it needs to be powerful and long-lasting enough to take drivers where they need to go with a minimum of recharging. Until recently, no reliable, mass-producible batteries have been manufactured that could make electric cars competitive with gas-powered cars. However, that's beginning to change. Electric cars have not only become feasible, but they're now expected to start rolling off the assembly lines of major automobile manufacturers.

Read the next page to find out if batteries will ever be a practical way of powering an automobile.