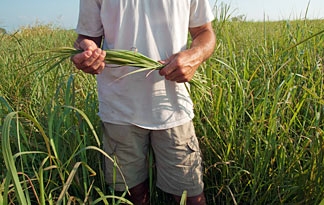 From wood-burning stoves in Sudan to coal-fired power plants in Pittsburgh, most of the world runs on biomass energy -- energy produced using materials derived from living things. Two fossil fuels, coal and petroleum, supply about 80 percent of the world's energy. In contrast, biofuels -- fuels made from plants or from animal waste -- contribute less than 2 percent of all fuels produced commercially.

Shifting that load to biofuels is becoming increasingly attractive for numerous reasons, starting with environmental concerns. Both biofuels and fossil fuels release carbon (in the form of carbon dioxide or methane) when they're burned to produce energy. The difference is that the carbon in biofuels was only recently removed from the atmosphere by the plants used to make the fuel. (Plants, remember, "inhale" carbon dioxide and "exhale" oxygen.) Thus, putting that carbon back into the atmosphere doesn't throw the balance off too much.

In contrast, the carbon in fossil fuels has been stored there for millions of years. Releasing it into the atmosphere creates an excess, contributing to smog formation and climate change. Also, biofuels emit no toxins, as opposed to the sulfur and mercury released when coal is burned.

The basic process for making biofuel from biomass is similar to how your body turns food into fuel: Heat, enzymes and fermentation bacteria break down complex starches into simple sugars. That's why high-starch food crops like corn and sugarcane are also prime sources of biofuel -- though any crop, and even waste material from food crops, can be used.

Advances in the methods used to make biofuel are adding to its appeal. Manufactured microbes have been shown to speed starch fermentation to create ethanol, making the process cheaper and more efficient. And one experimental method of gasification can convert all of the carbon present into the carbon monoxide needed for fuel, releasing no harmful carbon dioxide waste.

Growing crops to produce energy promises additional rewards. It could revive local agricultural economies and reduce dependence on foreign sources. It could open new markets to existing crops by utilizing by-products and waste materials that are currently thrown away. And some biomass energy crops attract beneficial insects, reducing the need for pesticides.

However, as with any resource, shortsightedness, lack of knowledge and plain greed can derail biofuel's potential for good. On the next page we'll look at some of the challenges to energy-crop agriculture.

Problems With (and Solutions for) Crop-based Biofuels

A serious problem with biofuel farming today is that it competes with food production for land and other resources. In 2007, one-third of the U.S. corn crop wound up being used to produce ethanol. The resulting shortage has been fingered as a cause for the skyrocketing prices of corn products, which are staples in many countries. As the world's population and calorie needs grow, the squeeze will only get tighter.

Planting energy crops could upset the ecosystem. In Malaysia, for example, jungles are being uprooted to plant palm trees for their oil. And some promising crops could become invasive species. For example, a giant reed that seemed ideally suited for Florida's tropical climate could also overwhelm native Everglade plants and choke waterways.

Additionally, the environmental impact of producing some biofuels makes them less eco-friendly. Growing corn for ethanol uses vast amounts of water and nitrogen fertilizer. And large-scale ethanol production would mean laying new pipelines to transport the fuel -- if it were piped through existing gasoline lines, it would corrode them and pick up contaminants.

Identifying these potential problems has allowed scientists to suggest potential solutions. Rather than using potential sources of food for biofuel, farmers could raise dedicated biofuel crops that actually benefit the environment. Switchgrass, for instance, is a water-thrifty native to the Great Plains that, as a perennial, it doesn't need annual replanting. Plus, it actually restores nutrients to the soil, boosting the next season's growth.

To relieve land stress, biofuels might be extracted from plants that thrive in conditions where food crops flounder. For example, poplar trees can grow in toxic soil due to their ability to remove and destroy contaminants, such as petroleum. Another possible solution to biofuel's problems is breeding new strains of both fuel and food crops that are more drought and saltwater resistant.

Using these and other techniques to regionalize fuel markets could ease the environmental toll of transporting fuels. Cars in the Midwest might run on an ethanol blend made with Illinois corn; in the South, with Louisiana sugarcane.

Experts say we're a good five to 10 years away from seeing biofuels being used as an everyday energy source. Universities, private companies and governments alike are investing in research to speed the process. Learning where the balance lies between use and overuse, for each crop and in each region, could reap a healthy harvest of sustainable energy for generations to come.