How Does E85 Ethanol Affect You? 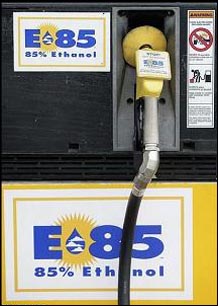 Most E85 pumps are located in the Midwest, but they are popping up in almost all 50 states.

If you choose to purchase an E85 ethanol flex-fuel vehicle, or discover you already have one, you'll be pleased to learn it won't require any drastic changes in your driving habits. If you insist on using E85 ethanol fuel most or all of the time, however, and you will be compelled to make some compromises.

As the term "flexible fuel" implies, any E85 ethanol flex-fuel vehicle can run on 100 percent E85, 100 percent pump gasoline of any octane, or any combination of E85 ethanol and gasoline. The car's on-board diagnostic systems compensate for any of these blends to keep it running according to manufacturer's specifications.

Automakers spend an estimated $150 to make a vehicle E85-ethanol capable, but none charges customers more for an E85 ethanol flex-fuel vehicle compared to a gasoline-only counterpart. Neither do they vary horsepower ratings for E85 ethanol flex-fuel engines. E85 ethanol has an octane rating of 100-105, versus 85-95 for gasoline, but manufacturers do not tune E85 ethanol-capable engines for higher performance than their gas-only counterparts. This allows them to run efficiently on conventional gasoline.

On the road, real-world performance is indistinguishable. Consumer Guide's automotive editors road tested an E85 ethanol flex-fuel Impala on both 87 octane gasoline and E85 ethanol, and could not detect a difference in engine performance, smoothness, or sound.

Some E85 ethanol proponents say the blend keeps fuel systems cleaner than gasoline, for potentially lower long-term maintenance costs. Ford and GM have no special maintenance requirements for their E85 ethanol flex-fuel vehicles, but other manufacturers may require use of specific engine lubricants. Check your owner's manual or consult your dealer. Motorists fueling up with E85 ethanol should share that information with their dealer service department or parts supplier when ordering replacement parts.

Where To Find E85

As of November 2006, according to the U.S. Department of Energy, Minnesota led the nation with 300 E85 ethanol fuel sites, followed by Illinois with 132, Missouri with 63, Iowa with 56, and South Dakota with 50. Most states had fewer than a dozen. Alaska, Delaware, Hawaii, Maine, New Hampshire, New Jersey, Rhode Island, and Vermont had none. Go to E85refueling.com for a list of stations that carry E85.

Supply, demand, and distribution costs figure among reasons E85 ethanol can be more expensive than conventional gasoline at the pump. Government and auto industry efforts to promote the fuel have increased demand for E85 ethanol, helping create a supply crunch at refineries. In addition, wholesale ethanol prices are increasing as oil companies stock up on the alcohol as a substitute for petroleum additives suspected of causing cancer. And E85 ethanol costs more to distribute than gas. The blend can't be pumped through petroleum pipelines because of the corrosive impact of its alcohol content, for example.

In the final analysis, of course, E85 producers and retailers are free to charge what they can to satisfy demand and make a profit. So you've found a station with E85 ethanol, decided the price was right, and you've filled the tank of your flex-fuel car or truck. How far will it take you?

Not as far as a tank of gasoline would. As the examples of the Impala and F 150 show, your fuel economy using E85 ethanol is lower than with gasoline. These are not isolated examples. Overall, depending on the vehicle, fuel economy with E85 ethanol is some 20 to 30 percent less than with gasoline. Consumer Guide's test Impala, for example, averaged 24.2 mpg on gasoline, but just 16.9 mpg in similar city/highway driving using E85 ethanol.

Looked at another way, a tank of E85 ethanol will take you only about 80 percent as far as you could drive on a tank of gasoline. On E85 ethanol, you'll stop more to refuel, have to plan ahead to make sure the station carries E85 ethanol, and perhaps pay more per gallon once you get there.

The difference in miles per gallon between gasoline and E85 ethanol has to do with E85 ethanol's lower energy content per unit of volume. Measured in British Thermal Units (BTUs), a gallon of E85 ethanol has only 72 percent of the energy in a gallon of gasoline. Go to fueleconomy.gov to compare EPA fuel-economy estimates for the same flex-fuel vehicle running on E85 ethanol and on gasoline.

So we've seen that choosing an E85 ethanol flex fuel vehicle and running it on E85 ethanol may not be to your personal advantage in terms of convenience and fuel cost. But it won't affect vehicle performance. And once you consider arguments on both sides of this the complex issue, you may decide that buying a flex-fuel vehicle and running it on E85 ethanol is a personal gesture of support for American agriculture, alternative fuels, and energy independence.