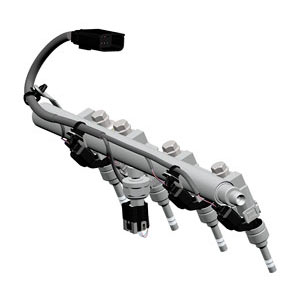 Direct injection engines literally give you more bang for your buck, for two main reasons. One, they use a "leaner" fuel-air mixture ratio. Second, the way the fuel disperses inside the chamber allows it to burn more efficiently. Let's take a quick look at each.

The ratio of air to fuel as it burns in an engine will have certain, predictable effects on engine performance, emissions of pollutants and fuel efficiency. When the amount of air in the mixture is high, compared to the amount of fuel, it's known as a "lean" mixture. When the reverse is the case, it's called a "rich" fuel mixture.

Direct injection engines use a mixture of 40 or more parts air to one part fuel, written as 40:1. That compares to a normal gasoline engine's mix of 14.7:1. A leaner mixture allows fuel to be burned much more conservatively.

A second efficiency plus for direct injection engines is that they can burn their fuel more completely. The fuel can be squirted directly where the combustion chamber is hottest -- in a gasoline engine that means it ends up close to the spark. With a traditional gasoline engine, the fuel air mixture disperses widely within the chamber, leaving a substantial amount unburned and therefore ineffective.

So what about the rest of the engine? Do direct injection engines represent a radical departure from the known and accepted principles of internal combustion?

The short answer is "no." To be sure, direct injection engines do use a few special bits and technical tricks:

The NOx issue notwithstanding, gasoline direct injection engines get high marks in particular for their cleaner emissions. It's for this reason that numerous engine companies have toiled to build two-stroke versions of the gasoline direct injection engine. While four-strokes are found on most automobiles and street-legal motorcycles, two-strokes rule when it comes to off-road motorcycles, small boat and personal watercraft engines and many of the motorbikes that serve as primary transportation in developing nations.